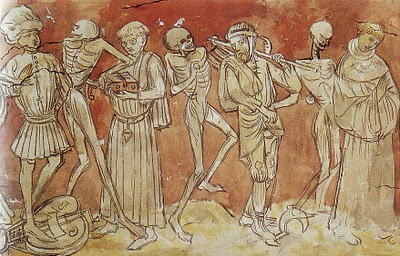 Death was everywhere in the Middle-Ages. The ‘danse macabre’ is a late-medieval allegory on the universality of death, produced with the intention to remind people of the vanity of our earthly life. No matter one’s social position, the dance of death unites all. It was a warning for the mighty, a comfort to the poor, and an invitation to lead a Christian life. The dance consists of death personified leading a row of figures from all walks of life to the grave, typically with the skeletons of an emperor, king, youngster, and beautiful girl. The deathly horrors of the fourteenth century, famine, war, the plague, were culturally digested throughout Europe. The omnipresent possibility of death increased the religious desire for penitence, but it also evoked a desire for relief, a last dance as cold comfort. The ‘danse macabre’ combines both desires. The earliest examples of such plays, which consisted of short dialogues between Death and each of its victims, can be found in the direct aftermath of the Black Death in Germany (where it was known as the ‘Totentanz’). Both the play and the evolving paintings were ostensive penitential sermons aimed at the illiterate. The class distinction is neutralized by Death as the ultimate equalizer, so that a socio-critical element is subtly introduced. The earliest artistic examples date from 1424 and can be found in the cemetery of the Church of the Holy Innocents in Paris. Most famous in European art history are the woodcuts designed by Hans Holbein the younger and executed by Hans Lützelburger (1538). The pictures here show less known historiated initials, used by the Zurich printer Christoff Froschauer.

One thought on “Danse Macabre”