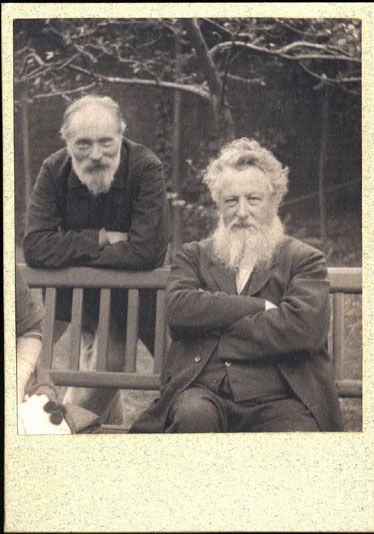 There are two different interpretations of the concept of the private press. There is an approach that takes the term in a very wide sense. The hallmark of the private press is that the profit making principle is non-existent. Financial gain is not part of the process. The printer produces a book purely for personal satisfaction or for the pleasure of a circle of friends – the ‘book for book’s sake’. Those involved created books by traditional printing and binding methods, with an emphasis on the book as a work of art and manual skill. Such an interpretation allows for a wide historical overview. The ‘Officina Goltziana’, for example, has been called the first private press in the Low Countries. This press was founded around 1562 in Bruges by the painter and numismatist Hubert Goltzius at the request of his patron, the bibliophile and collector Marcus Laurinus, Lord of Watervliet, who produced a history of antiquity based on coins and medals for which he needed the co-operation of a skilled artist. He persuaded Goltzius to move to Bruges, become a citizen and start a printing shop. The first book came off the press in 1563: C. Julius Caesar. It was intended to be part of a series of nine works. Three years later, the Fastos magistratuum et triumphorum Romanorum appeared. Both books are particularly beautiful due to austere typography and the images of coins. Some commissioned copies are known to have had special bindings.

Others limit the development of the private press in stricter chronological terms. The history of the ‘private press movement’ starts with William Morris’s foundation of the Kelmscott Press in 1890 and the publication of his own work The Story of the Glittering Plain. There were predecessors of course. To many bibliophiles, Horace Walpole had set an early example of the notion of a private press. He founded his Strawberry Hill Press in June 1757, a press that was unique for the importance of the books, pamphlets, and ephemera it produced. And then there was William Blake. The latter had experienced that his powerful visions were a commercial failure and that his interpretation of Young’s Night Thoughts did not sell. As a painter and poet and he needed to create a medium through which he could reach kindred souls. To this end, he published his splendidly illuminated books.

It was William Morris who succeeded in establishing a profitable private press. His initiative gave birth to a host of presses in England and Europe. Fin de siècle aestheticism fuelled the private press movement. Lucien and Esther Pissarro’s Eragny Press, Rickett’s Vale Press, Ashbee’s Essex House Press, Cobden-Sanderson’s Doves Press, all have their origins in the interest engendered by Morris’s experiment. John Horby’s Ashendene Press carried forward the idealism of the private press movement into the twentieth century. The life of the press spanned forty years, from the Victorian period to the beginning of the modern era. After the Great War was, a new generation of private presses came to be. The Golden Cockerel, the Nonesuch, the Shakespeare Head, and others continued the tradition. In Europe, the Zilverdistel, the Cranach Press, and the Officina Bodoni made outstanding contributions. Members of the movement shared a variety of attitudes and features that were significant within the context of the time, such as political protest and anti-capitalism (William Morris), although some of its most enthusiastic adherents were extremely rich men who could afford to equip fine print shops and hire experts to run them (Walpole’s Strawberry Hill, Kessler’s Cranach, Hornby’s Ashendene Press); alternative life style and sexual liberation (Eric Gill, Robert Gibbings, Harry Kessler); stylistic and physical regeneration; a contempt for industrial mass-production, etc. Although the emergence of ebooks has given the rich tradition of the Book Beautiful a renewed and contemporary impetus, the ‘private press movement’ belongs to the late nineteenth and early twentieth century.

William Morris was a major figure in the Arts and Crafts Movement, a loosely-linked group of artisans, craftsmen, architects, and writers who sought to elevate the status of the applied arts in a revolt against Victorian tastes and manufactures. The movement initially developed in England during the latter half of the nineteenth century and was inspired by the demands of social reform by thinkers such as Walter Crane and John Ruskin. Their concepts of good design were linked to notions of a decent society, one in which the worker was not brutalized by modern factory conditions, but would take pride in his skill. Mass produced consumer goods were shoddy in design and quality. The Arts and Crafts Movement stood for the revival of craftsmanship. Medieval Guilds provided a model for the ideal craft production system.

During the 1870s Morris became increasingly radicalized in his political ideas. His commitment to Socialism was an attempt to resolve the enormous disparities which he perceived as existing between things as they were and as they should be. Capitalism, in his opinion had rendered bourgeois culture spiritually sterile. He began reading Marx’s Das Kapital in a French translation, and soon declared himself a Marxist. In 1884 he founded the Socialist League, and became its first treasurer as well as editor of Commonweal, the official party organ. In lectures and in print, he called for a Socialist Revolution in England with the ultimate aim of transforming Victorian Britain, which had been ravaged by the Industrial Revolution, into a communal society. By 1890 anarchists had gained control of the Socialist League. William broke with the League and led the Hammersmith Socialist Society, a precursor of the Fabian Society, until he and his followers were reconciled with the Social-Democratic Federation in 1894. Thereafter he devoted much of his time to the Kelmscott Press.

During the final phase of his life Morris combined his love for medieval literature with his craftsman workshop ethic into the Kelmscott press, the first of the private press movement. Joined by fellow socialist and typographic expert, Emery Walker, Morris studied incunabulum from which he drew inspiration for manufacturing his own paper, ink and type design. The Kelmscott project is very much in line with Morris’s philosophy and cultural criticism. With the design of books published by his Press, Morris hoped to re-awaken the lost ideals of book design and inspire higher standards of production at a time when the printed page was at its poorest. He particularly admired and studied the letterforms of Nicholas Jenson. He had those letters photographed and used them as the basis for his own Jenson adaptation, Golden Type. In seven years of operation the Kelmscott hand-operated press published fifty-three books in 18,000 copies. Morris stands at the beginning of the golden age of the private press movement which brought an increase in appreciation for fine printing and revived the skills of typographic design.

Morris’s masterpiece was the Kelmscott Chaucer, the pinnacle of his career as a typographer and designer. The 556 pages and eighty-seven illustrations of The Works of Geoffrey Chaucer, Now Newly Imprinted (Hammersmith: William Morris at Kelmscott Press, 1896) took several years to complete. In total 425 copies of the book were completed by a total of eleven master printers. Morris had the Chaucer font cut specifically for this book. The woodcut illustrations were designed by Edward Burne-Jones, a student of Dante Gabriel Rossetti and one of the leading figures of the Pre-Raphaelite school. This publication fulfilled Morris’s vision of what could be achieved through a combination of modern printing techniques and traditional crafts. The medieval style font, ornamental borders, decorative capitals and frames, combined with the woodcut illustrations, provide a fine setting for the poetic works of Chaucer (The Canterbury Tales, Troilus and Criseyde, The Parliament of Fowls, The Book of the Duchess, The House of Fame, and The Romaunt of the Rose). Burne-Jones considered it the finest book ever published and called it ‘a pocket cathedral’.

The book was immediately hailed as a masterpiece, the most spectacular publication to emerge from the Arts and Crafts movement, and the zenith of private press publishing. In October 1896, shortly after publication William Morris died. An original copy is now in the British Library’s ‘Landmarks in Printing’ Gallery, alongside such treasures as Shakespeare’s First Folio and the Gutenberg Bible. 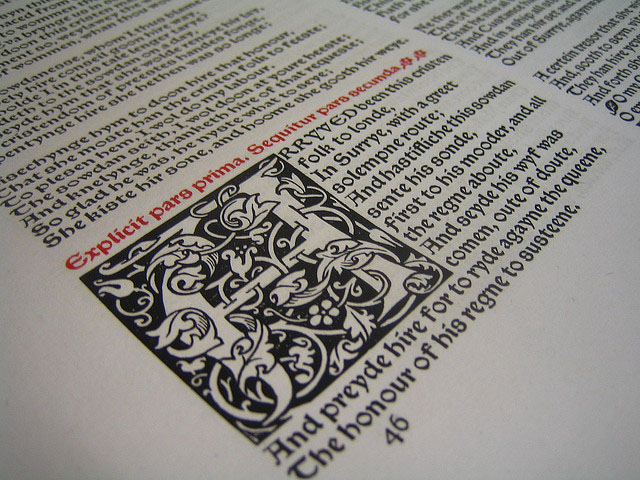