In 1906 Edvard Munch finished a full-length portrait of Harry Kessler. The painting is held at the Neue Nationalgalerie in Berlin. Graf (Count) Harry Kessler was a German diplomat, author and art patron. His father was a wealthy businessman and banker, and his mother, the Anglo-Irish Alice Baroness Blosse-Lynch. Young Kessler was educated in Paris and England until he was fourteen. His family moved in the highest of circles. Wilhelm I was attracted to his mother and speculation persisted that the Kaiser was Kessler’s true father. Bismarck was another family friend. Kessler was a member of the German delegation to sign the Treaty of Versailles after World War I. His liberal attitudes toward modern art would eventually provoke the rage of the Nazi regime.

Kessler’s life offers a vivid perspective on the dramatic transformation of European art and politics that took place between 1890 and 1930. In the first half of his career Kessler was an ardent champion of aesthetic modernism in Imperial Germany, becoming a friend and patron to pioneering artists and writers of his day. In his capacity as director of the Museum of Arts and Crafts in Weimar and vice-president of the German Artists League, he served as a spokesman for modern and experimental art. In the aftermath of the First World War, in which he served as a soldier and secret agent, Kessler embarked on a public career as a committed internationalist and pacifist, a stance that led ultimately to his exile from Germany upon the Nazi seizure of power. W. H. Auden called him ‘a crown witness of our times’.

It was known that Kessler had kept a diary since the age of twelve until his death in 1937 of which the earlier part was presumed lost. However, in 1983, on the island of Mallorca, a safe-deposit box was retrieved containing Kessler’s journals and correspondence, along with newspaper clippings and photographs. The valuable contents was transported to Marbach am Neckar, birthplace of Schiller and the place where the Deutsches Literaturarchiv (German Literature Archive) is kept. A team of scholars carefully transcribed the journals. The German edition of the diary runs to nine volumes. The diary itself is on a par with the private records held by Samuel Pepys, the Goncourt brothers, André Gide, or Henri Frédéric Amiel. Kessler was intimate with high society in England, France, and Germany. He knew most of the great European artists personally and supplied lively portraits of Verlaine in old age, of Degas and Renoir, of Rodin and Maillol, of Rilke and Hofmannsthal, of Cosima Wagner and Richard Strauss, of Diaghilev and Nijinsky. He was close to Elizabeth Nietzsche, the philosopher’s notorious sister. When she informed him that Friedrich was dying, he travelled to Weimar and left a moving description of Nietzsche’s final hours. Kessler was a cosmopolitan mind, a European in the proper sense of the word.

Kessler’s ideal of beauty was male. It was men bathing naked in rivers. It was working-class boys fighting in the Whitechapel boxing ring. It was Nijinsky’s dancing. As early as 1908, Kessler was attracted to Aristide Maillol’s sculpture and he invited the artist to go with him to Greece. He spent a great deal of effort persuading the firmly heterosexual sculptor to take a look at the male nude. He specifically encouraged him to use as his model the seventeen year old Tour de France racing cyclist and jockey, Gaston Colin, with whom Kessler was having an affair. Le Cycliste, also called L’éphèbe (1908) represents Colin. It was the first time the sculptor had worked on a male figure. With this statue in bronze, Kessler wanted to own a full-length nude portrait of his companion, a picture of physical perfection. However, critics considered its realism disconcerting, and even Kessler found some of its features exaggerated. This was a proper celebration of the penis. The fact that the statue is smaller than life sized deepened some of the embarrassment.

Darwin’s thinking had made a massive impact in Germany. The Origin of species was translated into German within a year after publication in England. Both liberals and socialists were attracted to the socio-economic directions Darwin seemed to have indicated. In 1899, socialist Ludwig Woltmann introduced the notion of the ‘social Darwinist’ into the academic jargon. Darwin himself had been reluctant to apply the concept of progress to biological evolution, but German thinkers were only too eager to transpose his ideas into the sphere of social life and politics and make claims of cultural and material progress (or decadence). The theory of evolution gave rise to a whole new set of moral norms. Health (fitness) and sickness (unfitness) became the criteria for making moral judgments. Eugenicists claimed that morality and ethics arise from the law of the preservation of the species. Whatever would lift man to a higher level of mental or physical perfection is moral. Sport and the building of sport stadiums became part of this drive for regeneration. In his admiration for sportsmen (he admired the modern Olympic ideal and the efforts made by Pierre de Coubertin), Kessler showed his Anglo-German background. The military of the British Empire had a long tradition of involvement in sport. Along with exercising and drilling, sport was one of the few other activities for British troops posted in colonial settlements. The army patronized sport in various ways because it enhanced fitness, boosted morale, provided a physical outlet, and countered boredom. Motivated by anxieties about perceived physical deterioration of the young, English physical culturalists represented the cultivation of a fit male body as an obligation of citizenship and patriotism. This explains the extraordinary ‘popularity’ of the war/sport and sport/war metaphors during the nineteenth century and beyond.

There is also a classical analogy that would have appealed to Kessler. Britain’s pre-Victorian overseas expansion stimulated comparisons. Roman dignity had been claimed for British monarchs and achievements by Dryden and others. In 1876 Disraeli introduced the Royal Titles Act which raised the status of the English Queen to ‘Regina et Imperatrix’. British imperialists were keen to draw a historical comparison with Imperial Rome to motivate and inspire their contemporaries. It was an appealing analogy: Rome had been a civilizing force in barbaric times and Britain’s mission was to play a similar role in the modern world. This whole odd mixture of Greece, Olympics, classical ideals, physical perfection, and regeneration, made an impact on Kessler’s development as a book designer.

In 1913, Kessler founded the Cranach Press in Weimar. Influenced by the flourishing of English private presses, he achieved publishing distinction by employing experienced artists and artisans. The relatively few productions of the Press demonstrate the highest standards of skill and craftsmanship. Special types and papers resulted from thorough experimentation, and great care was devoted to the design of each volume. The Press produced a few masterpieces including Les éclogues de Virgile (The eclogues of Virgil), illustrated by Aristide Maillol, and Shakespeare’s Hamlet with wood-engravings by Edward Gordon Craig. The plan for a Virgil project was conceived during the time Kessler and Maillol were in Greece. Begun in 1912, it was delayed by the war and publication did not take place until 1926. The French quarto edition was printed in 250 numbered copies on handmade rag paper with forty-three original woodcuts printed in black by Maillol, and an additional double-suite of woodcuts printed in black and red bound in at the back. The title-page and initials were designed by Eric Gill. A German and an English version were simultaneously issued.

The Cranach edition of Hamlet consists of Gerhart Hauptman’s translation of the second quarto of Shakespeare’s play, surrounded by the relevant source texts of Saxo Grammaticus and François de Belleforest. One of the finest books ever produced, it was printed in an edition of 322 copies. Edward Gordon Craig designed some eighty of the woodcuts, with Eric Gill contributing one. Craig had been working on woodblock illustrations for Hamlet since 1908. Kessler would print two grand editions of Hamlet with Craig’s woodcuts, one in German in 1928, and an English version in 1930. The beauty of the layout, illustrations, typography, and paper are in the finest tradition of the book revival of the late nineteenth and early twentieth century. Kessler, however, wanted to achieve more than just a fine press edition of Hamlet. He secured the support of scholar John Dover Wilson, chief editor of the New Shakespeare, a series of editions of the complete plays published by Cambridge University Press, to edit the work. The Cranach Hamlet is a tribute to the beauty of early printed books. The typeface, designed by master calligrapher Edward Johnston, was based on the Gothic type used by Fust and Schaeffer in their famous 1457 Psalter. The layout of text and illustration surrounded by commentary in a masterly manner mirrors that of early printed books. 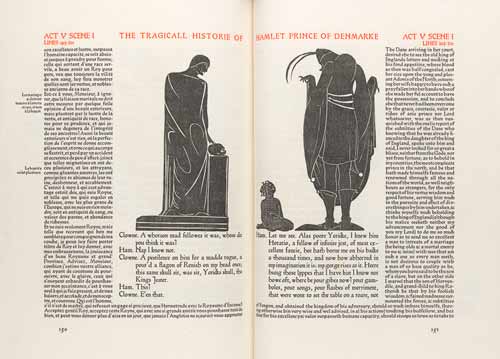