When graffiti first made a name for itself in early 1970s New York City, it was all about ‘getting up’. Graffiti writers wandered the dark New York streets in order to gain as much ‘fame’ as possible. Pretty much the only way to gain a name back then, was to be seen everywhere. The graffiti game was all about quantity.

When, in 1971, The New York Times wrote an article about graffiti writer TAKI 183, a new concept of fame was born. The article, appropriately titled ‘‘Taki 183’ spawns pen pals’, made young graffiti writers realize there is more to kudos than just having your name known on the block. Because of his work as a delivery boy, TAKI 183 was the first writer to have his tag up in all five New York boroughs and beyond. His repute was then further heightened by the resulting article in The New York Times[1].

After the TAKI article in The New York Times, graffiti in New York truly exploded. Martha Cooper and Henry Chalfant, authors of the graffiti Bible Subway Art, describe the impact of the article as follows: ‘The […] article in The New York Times apparently struck a responsive chord in the hearts of Taki’s contemporaries. Kids impressed by the public notoriety of a name appearing all over the city realized that the pride they felt in seeing their name up in the neighborhood could expand a hundredfold if it travelled beyond the narrow confines of the block.’[2] Within no time, New York was ‘bombed’ with graffiti everywhere.

It got to a point when just getting up wasn’t enough anymore. It seemed like everybody and their momma was out bombing New York City, and since TAKI had set the unreachable bar of what quantity really meant, writers had to take to other ways in making a name for themselves. 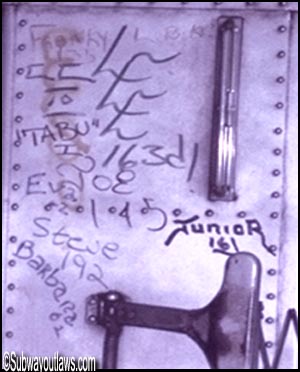 Another style pioneer of these early days who can’t be left unaccredited is STAY HIGH 149. By incorporating the character from the TV show The Saint in his tag, STAY HIGH made his logo stand out amongst all of the bombing in New York City. Staying true to his alias, he made sure his Saint was always seen with a burning joint in his mouth, which he also used as the horizontal line in his H. 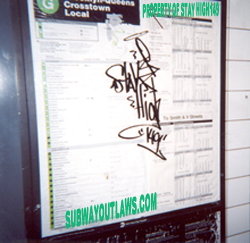 The biggest switch in the history of graffiti, however, was the transition from plain designs to bigger pieces, which coincided with the first stylistic experimentations in tagging. EVA 62 and BARBARA 62 are often credited with being the first writers to outline their tags, but their work lacked stylistic development. At first, pieces were nothing more than giant tags, outlined by another colour. With stylistic innovations by such artists as LEE 163 and STAY HIGH 149, pieces quickly developed into more complex works.

The first real typographic trend in graffiti is introduced by TOPCAT 126, a Philadelphia writer who had moved to Harlem. The introduction of his ‘Broadway Elegant’, also known as Manhattan Style, marks the first typographic wave within New York City graffiti history. Broadway Elegant featured long slender letters, which often had platforms on the bottoms of the stems. Broadway Elegant was named after the famous New York City Broadway boulevard which bends from Brooklyn through Manhattan al the way up to Yonkers.

A logical response to the sensual thin lines of the Broadway Elegant style was the introduction of Bubble Letters, also known as Softies or Bronx Style, by PHASE 2. At the same time, Brooklyn Style was born, which was characterized by its wild nature. Brooklyn Style tagging was more dificult to read, and featured lots of arrows and stars.

The introduction of named styles in 1972 coincided with graffiti’s “metamorphosis from crime to art.”[3] A piece was no longer just a bigger version of a tag. Arrows, curls and connections between letters were all added to the arsenal of possibilities to separate oneself from other graffiti artists. With the introduction of 3D and depth by writers like FLINT 707 and PISTOL, New York City graffiti writers by the mid 70s had pretty much cooked up all basic elements still used to this day.

It was in this same period that graffiti first made its way into the finer Manhattan art galleries. Even though graffiti’s gallery hype in New York quickly vanished, cities like Amsterdam and Sao Paulo gave birth to their own graffiti scenes by the end of the 1970s, mostly unaware of what was happening in New York. Meanwhile, New York writers expanded on their own styles, which ultimately led to the birth of Wild Style. Wild Style piecing was in a way an offspring of Brooklyn Style tagging, defined by hard to read letters, complex connections between letters and a mixture of letter styles. Writers like KASE 2 gave birth to a subgenre of Wild Style, known as Computer Rock.

By the early 1980s graffiti truly exploded into a worldwide phenomenon. Movies like Style Wars and Wild Style, and books like Subway Art, torpedoed the art careers of writers like LEE Quinones, SEEN, ZEPHYR, DONDI and many others.

Because of expositions in the Netherlands, Amsterdam punk graffiti writers were some of the first Europeans to meet fellow New York artists. Amsterdam graffiti history therefore makes the perfect subject of the second part of this series. Stay tuned for Typograffiti Part 2: Amsterdam meets New York.

[After this article was published, we received word of STAY HIGH 149’s passing. May he rest in peace. True legends never die.]