Vlaanderenstraat is a street in the Flemish coastal town of Ostend (Oostende). Originally a small fishing village, the town acquired something of a reputation in 1834, when King Leopold I made his summer residence there, and went on to become a fashionable seaside resort in the following decades. 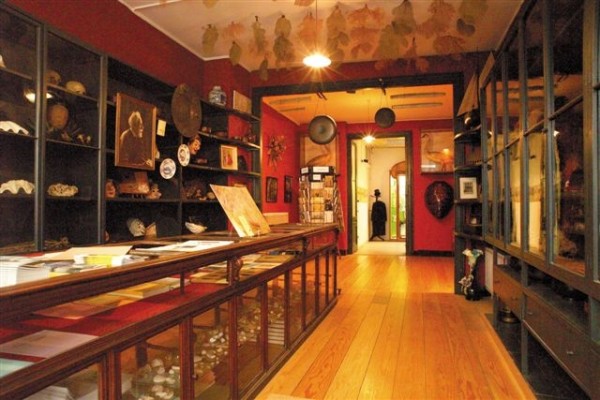 It was in Ostend that Englishman James Frederic Ensor met local girl Marie Catherine Haegheman. He was probably an alcoholic and a bankrupt. The family’s main income came from the shop owned by Marie’s family, an antiques and souvenirs emporium selling china, taxidermic specimens and grotesque carnival masks. James Ensor was born in 1860 and the future painter grew up in this setting of ‘shells, lace, rare stuffed fish, old books, engravings, weapons, Chinese porcelain, an inextricable jumble of miscellaneous objects’ (letter to Louis Delattre, 4 August 1898). Ensor himself lacked interest in academic study and left school at the age of fifteen to begin his art training with two local painters. From 1877 to 1880, he attended the Académy Royale des Beaux-Arts in Brussels, where Fernard Khnopff, Theo Van Rysselberghe, Willy Finch, and other future members of L’Essor and Les Vingt were among his fellow students. In Brussels, he met poet and art critic Théo Hannon who introduced him to the liberal circle of Ernest Rousseau, professor at the Université Libre de Bruxelles, and his younger spouse Mariette. The home of the Rousseau couple was a meeting place for the artistic, literary and scientific elite of the time. Here he met Félicien Rops, Eugène Demolder and others who stimulated his artistic and intellectual development.

In 1880 Ensor installed a studio in the attic of his parental home. Although he lived in Ostend until his death, he regularly stayed in Brussels and participated in the artistic life of the capital. With the exception of a few excursions to London, Holland and Paris, Ensor scarcely travelled. He was a loner who despised most cultural representatives and was convinced they hated him. He was both an aggrieved traditionalist and a sophisticated artist who helped shape early Modernism, not in a Paris studio but in an attic room over an Ostend novelty shop. His self-portraits tell their own story. Within the span of five years in the late 1880s he depicted himself as a cross-dressed dandy, a rotting corpse, a bug, a fish, Albrecht Dürer and a crucified Jesus. Between 1885 and 1888, Ensor’s attention went chiefly to drawing and etching. Under the influence of Rembrandt, Redon, Goya, Japanese woodcuts, and Brueghel, Ensor developed a highly personal iconography and design. He rejected French Impressionism and Symbolism and lent himself to the expressive qualities of light, line, colour and the grotesque and macabre motifs which he rendered in massive tableaux such as in the series ‘The Aureoles of Christ or The Sensibilities of Light’ (1885/6). While his early works depict realistic scenes in a sombre style, his palette subsequently brightened and he favoured increasingly bizarre subject matter. Such paintings as ‘The Scandalized Masks’ (1883) and ‘Skeletons Fighting over a Hanged Man’ (1891) feature freakish figures. Masks recall the strange atmosphere of the family shop as well as the local carnival tradition. They conceal a reality that the painter found unbearably cruel, while skeletons point to the vanity of the world. Ensor’s cityscapes of Brussels and Ostend offer a derisive view of contemporary urban renewal and the social transformations it enforced. His work is socio-cultural criticism in colour.

From his studio in the attic on the fourth floor of the house on the corner of Vlaanderenstraat and Van Iseghemlaan, Ensor had a splendid view over the rooftops of his hometown. There are several paintings and drawings on this topic, including the oil paintings ‘La Rue de Flandre dans le neige’ (1880/1) and ‘Boulevard Van Iseghem’ (1893). More relevant in the context of his oeuvre is the 1890 oil painting ‘Musique Rue de Flandre’ or ‘Muziek in de Vlaanderenstraat’ (he also made an engraving of the scene) in which, from a bird perspective, the festive passage has been recorded of a military band in the street, followed by a mass of people, approaching the observer and marching in the direction of the sea. The picture reflects Ensor’s intense preoccupation with the masses. In this case, the image is light-hearted rather than fearful. It is as if Ensor had painted the street and houses first and waited till later to add a seemingly endless stream of people. The marching musicians and their followers are all identical characters. Ensor seems to suggest that within the crowd all individuality dissolves. The single individual is becoming increasingly unable to have a meaning other than as a function of something in which he ceases to have a personality. By contrast, the buildings in the street are presented in an accurate manner, one of those being the Hôtel de Flandres (now Albert II). It was at the time one of the most important hotels in Ostend and had a central gate leading to a courtyard and stables. Nearly all of Ensor’s illustrations of city life include images of crowds and masks, elements applied to his work in order to evoke the horror of the modern metropolis. This is particularly evident in his masterpiece. In 1888, Ensor tackled the monumental ‘Christ’s Entry into Brussels in 1889’ which elaborates an earlier theme treated in his 1885 drawing ‘Les Auréoles du Christ’, a vast masked carnival mob advancing towards the onlooker. Ensor gave his own features to Christ entering Brussels, as if sacrificing his life and his peace of mind to painting. Ensor’s society is a mob represented by an ugly and dehumanized sea of clowns and caricatures. Public, historical, and allegorical figures along with the artist’s family and friends make up this mob. The haloed Christ at the centre of the turbulence is an isolated visionary amidst the herd-like masses of modern society. After rejection by Les Vingt, the association of artists that Ensor had helped to found, the painting was not exhibited in public until 1929. In 1917, Ensor moved to the house in the Vlaanderenstraat (no. 27) that he had inherited from his uncle. Today, the James Ensor museum is housed there.

Ensor’s macabre depiction of the masses is by no means exceptional in European culture. Fear of the masses dates back to the eighteenth century and was widely expressed, particularly in England. Lord Chesterfield may have been responsible for introducing the word mob in the English language (1751); Laurence Sterne spoke of the herd of the world (1768). The word ‘mob’ is derived from the Latin phrase mobile vulgus (the fickle crowd). It had its origin at the period of the Exclusion Crisis when the nation became divided into party and faction, Whig versus Tory. Elections for parliament, and other public meetings, resulted inevitably in riots, fights and other disturbances. Initially the word ‘the mobile’ circulated. It was soon shortened to ‘mob’ and became an increasingly loaded term encapsulating the growing fear of social upheaval. During the 1790s the imagery concerning the masses became more surreal. In English journalistic and literary iconography in response to the French Revolution a new image was introduced that would be worthy of James Ensor himself. The image is that of cannibalism.

After the massacres of September 1792, James Gillray portrayed a family of Paris sansculottes feasting upon dismembered bodies, and in 1793 he depicted the exiled revolutionary leader Charles Dumouriez about to eat the severed head of William Pitt. Radical Tory journalists associated with Fraser’s Magazine adopted this set of images and gave it new social resonance in the restless 1830s and 1840s. Social unrest, it was feared, would give rise to a new generation of bloodthirsty barbarians. Fraser’s pointed time and again to Paris in 1792/3 to warn its readers of the dangers at home. Thomas Carlyle was closely connected to this magazine in the 1830s. He made the cannibal and eating imagery his own. The myth of a self-consuming revolution was passed on virtually ready-made from Carlyle to Dickens, who incorporated it as the historical backdrop for A Tale of Two Cities. The fantasy of a cannibal-like insurrection persisted over the entire Victorian period: Carlyle’s ruthless Jacobins from the 1830s merely turned into H.G. Wells’s bloodthirsty Beast Folk and Morlocks from the 1890s. Yet, there is an interesting shift in application. By the end of the nineteenth century the fear of revolution had receded. The cannibal in society is given a different shape. It is no longer the revolutionary mob that drinks the blood of innocence, but the new industrial order is threatening to devour its workers. Capitalism, mechanism, and urbanism turn civilized man back towards a savage state of being. Wells’s oeuvre is catalogue of modern day barbarism, a never ending parade of cannibals fighting to consume one another.

Apart from his passion for painting, Ensor also placed great importance on his (mediocre) musical productions. In 1911, he wrote the libretto and composed the music for a ballet entitled ‘La gamme d’amour’. For this pantomime he designed the decor and costumes himself. In 1924, this ballet was performed in the Antwerp opera house. In that sense, it is appropriate that the artist is remembered in song. John Flansburgh and John Linell, founders of the Brooklyn-based American rock band They Migh Be Giants (TMBG), wrote the lyrics for a song for in which the painter is remembered. ‘Meet James Ensor’ and features on the 1994 album John Henry. Ensor would have appreciated the macabre lines of the refrain:

Meet James Ensor, Belgium’s famous painter
Dig him up and shake his hand, appreciate the man.