Near Place Pigalle is a leafy cul-de-sac, closed by a wrought iron secured gate, which is called Avenue Frochot. Developed in the 1830s, the avenue has an enticing artistic history. Alexandre Dumas and Victor Hugo lived here at one time; Toulouse-Lautrec had a studio at no. 15 which at the entrance shows a fine example of Art Deco stain glass; Théodore Chassériau, residing at no. 26, was neighbour to Gustave Moreau. Later film director Jean Renoir and gypsy jazz guitarist Django Reinhardt settled in the avenue. Composer Victor Masse died at number no.1. The property, partly visible from outside the gates, is supposed to be a haunted house, because of an unresolved murder and various unexplained deaths. 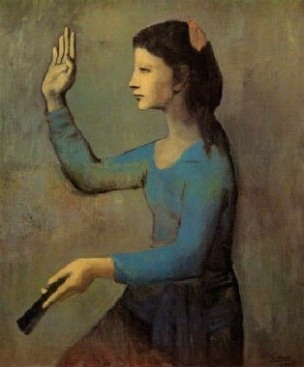 Pablo Picasso with his partner and model Fernande Olivier (real name: Amélie Lang – Picasso painted some sixty portraits of her) had started their stay in Paris at a Bateau Lavoir apartment. The Bateau was a gloomy mass of dirty premises made of beams and planks where between 1904 and 1914 a number of artists and poets would settle. In September 1909 however the couple moved from there into a furnished place on the Boulevard de Clichy with two windows overlooking the gardens of Avenue Frochot. There he painted ‘L’avenue Frochot, vu de l’atelier de Picasso’.

Nearby Rue Frochot is less exclusive, but certainly more lively. For a start, the street has a place in the history of the artist’s portrayal of onstage performers and performances. In 1886, twenty-two-year-old Henri de Toulouse-Lautrec entered the Dihau apartment at no. 6 Rue Frochot. He had come there to meet his cousins, and to gaze at a painting that had been given to the Dihau family fifteen years earlier by its creator, Edgar Degas.

The painting was ‘L’orchestre de l’Opéra’. Its central subject was bassoonist Désiré Hippolyte Dihau. Toulouse-Lautrec was inspired by the canvas. Within the decade, he would try his own hand at three portraits of the musician. Both Degas and Lautrec portrayed Dihau playing his bassoon. Both subsequently turned from music to stage and dance – ballet and cabaret – for subjects in their creative work. At one time, no. 4 Rue Frochot was the location of one of the most famous salons in Paris. A salon was a gathering of people who were invited by an inspiring hostess. Such social meetings were held for the refinement of taste and knowledge through conversation and exchange of ideas. The salon was an Italian invention of the sixteenth century. The word ‘salon’ first appeared in France in 1664 (from the Italian word salone which itself is derived from sala or reception hall). Before the end of the seventeenth century, such gatherings were often held in the bedroom of the lady of the house. Reclining on her luxurious bed, she invited close friends who would gather around her. The salon flourished in Paris throughout the seventeenth and eighteenth centuries and served as a meeting ground for political, social, and cultural discussion. And there was plenty to discuss between 1770 through 1830, years in which France experienced a plethora of change and growth, politically, socially, and culturally. The arrival and departure of the Enlightenment, the French Revolution and the Restoration, each left their marks on the Parisian salon. The presence of a beautiful and educated patroness gave additional charm to the concept of the salon. Aristocratic and upper bourgeoisie women known as salonnières organized salons from their homes.

The first renowned salon in France was the Hôtel de Rambouillet (formerly the Hôtel de Pisani), close to the Louvre, where from 1607 until her death Rome-born Catherine de Vivonne, marquise de Rambouillet, entertained her guests. She received her visitors in a salon painted in blue, the ‘chambre bleue’. Almost all major personages of the French aristocracy and literature of the time frequented her salon, including Corneille, Malherbe, Jean de La Fontaine, Madame de Sévigné, Paul Scarron, and many other prominent figures in social and cultural life of the age. The gatherings at the Hôtel de Rambouillet established the salon’s rules of etiquette which resembled the earlier codes of Italian chivalry.

Molière’s satire Précieuses ridicules was levelled at the numerous coteries which in the course of years had sprung up in imitation of Rambouillet. The idea of the salon and the role of the ‘salonnière’ were from the beginning controversial. Some argued that the salon offered women an education and a way out from the shadows of a pre-determined place in society. It granted her independence. To others, like Jean-Jacques Rousseau, these ladies represented the corruption, idleness and emptiness of aristocratic life. The controversy lingers on in contemporary historical debate.

The salon persisted into the nineteenth century, not just in Paris but in most European capitals (Berlin, Vienna, and elsewhere), and became woven into the fabric of cultural and political life. The role of salonnière however was increasingly taken over by a different type of lady. By the late nineteenth century courtesans – the ‘grandes horizontales’ – had reached a level of social acceptance in many circles and settings. As a figure, the courtisan appeared widely in a fictional context. 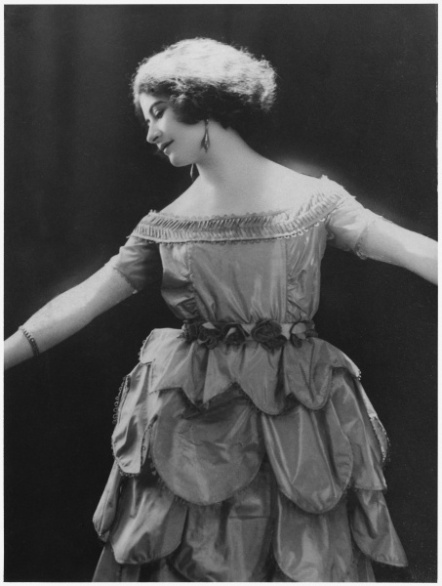 When sharing a bed with the celebrated pianist Henri Herz in Paris, she invited various guests to attend her salon – these included Richard Wagner, Hans von Bülow, Théophile Gautier and Émile de Giradin. At a Baden spa she met Portuguese marquis Albino Francesco de Païva-Araujo. She married him on 5 June 1851, acquiring a fortune, a title, and her nickname, ‘La Païva’. She left him the next day. Her final conquest was Prussian Count Guido Henckel von Donnersmarck (who gave her the famous yellow Donnersmarck diamonds). With his money, she erected the elegant Hôtel de Païva at the Champs-Élysées (designed by Pierre Manguin), a mansion notorious for lush parties that became symbolic for the decadent taste of the Second Empire.

Adolphe Monticelli’s painting ‘Une soireé chez La Païva’ gives an indication of the sumptuous surroundings in which these gatherings took place. Apollonie Sabatier, nicknamed ‘La Présidente’ by Edmond de Goncourt, was a bohémienne and courtesan who during the 1850s hosted a splendid salon at no. 4 Rue Frochot, a spacious apartment consisting of seven rooms built in 1838. There she met and entertained the élite of French art at the time, from Gérard de Nerval to Gustave Flaubert, Maxime Du Camp, Alfred de Musset, Hector Berlioz, Victor Hugo, Sainte-Beuve Jules de Barbey d’Aurevilly, and Édouard Manet.

Between 1852 and 1854 Charles Baudelaire addressed a number of poems to Apollonie, celebrating her as his Madonna and Muse (later collected in Les fleurs du mal). Gustave Flaubert and Théophile Gautier dedicated articles to her, fashionable Vincent Vidal painted her portrait, and in 1847 Auguste Clésinger sculpted her figure in marble as ‘Femme piquée par un serpent’ (woman bitten by a snake) which created a scandal at the Salon of that year. Belgian aristocrat and industrialist Alfred Mosselman who had made a fortune in civil engineering paid her bills (this eventually caused his bankruptcy which forced him to auction his famous art collection in the early 1860s). Gustave Courbet portrayed the pair in his famous painting ‘L’atelier du peintre’. After Mosselman’s death, Sabatier became mistress to art collector Sir Richard Wallace. Over the years she had developed a fine and costly feeling for aesthetics. 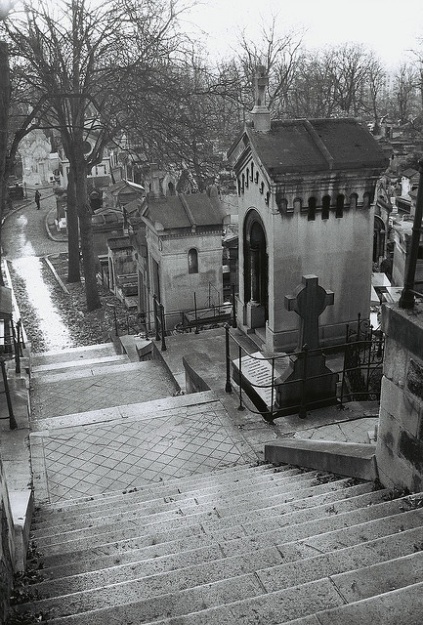 The name Frochot holds an honourable place in the annals of Parisian history. In the Middle-Ages, one of the Eastern hills near the capital was named ‘Champ-l’Evêque’ because it belonged to the Bishop of Paris. In 1626 the Jesuits acquired the land and property which they turned into a convalescence home. François d’Aix, Seigneur de La Chaise, also known as the Père Lachaise, spent most of his time in the Jesuits’ house and contributed to its beauty by creating idyllic gardens. The Jesuits left in 1762. The domain was acquired by Count Nicolas Frochot who, at the time, was prefect of Paris (in 1806 his portrait was painted by Andrea Appiani the Elder). He decided to use it as a burial ground. 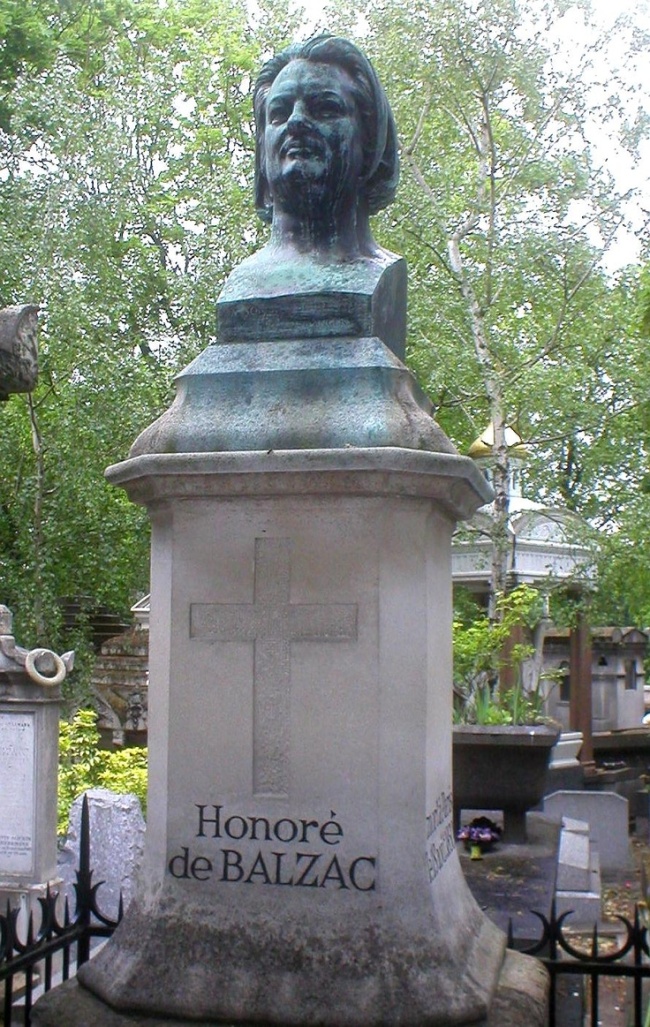 The cemetery was designed by leading architect Alexandre-Théodore Brongniart. Originally simply known as ‘cimétìère de l’Est’, it became soon known as the ‘Père Lachaise’, in loving memory of the confessor of Louis XIV. The cemetery was styled in the shape of an English garden and its broad avenues were decorated with lime and chestnut trees. When it opened for business on 21 May 1804, it was meant for Parisians living in one of the four districts of the Right Bank. However, affluent people did not want to be buried in what was considered a poor district. Many traditional superstitions concerning interment remained unchanged. Christians refused to have their graves dug in a place that had not been blessed by the Church. The opening of a new graveyard posed a particular challenge. No one would volunteer one of their deceased relatives to be the first to be interred, because of the widespread belief that the Devil would claim the soul of that particular corpse for himself.

The seventeen hectares of the cemetery remained empty until, in 1817, Frochot decided to take the initiative of transferring the ashes of Héloïse and Abélard there, as well as those of Jean de La Fontaine and Molière. The latter had died from pulmonary tuberculosis, possibly contracted when he was imprisoned for debt as a young man. His death had become a legendary tale: on 17 February 1617 he collapsed on stage in a fit of coughing and haemorrhaging while performing in his last play, which ironically was entitled Le malade imaginaire. He insisted on completing his performance. Afterwards he collapsed again before being taken home, where he died a few hours later, without receiving the last rites because two priests refused to visit an actor while a third arrived too late. The superstition that yellow brings bad luck to actors may originate from the colour of the clothing Molière was wearing at the time of his demise (in medieval religious plays yellow was the colour worn by the actor playing the devil). The Church refused to bury actors on consecrated ground, just like heretics, sorcerers or usurers. The stage was considered suspicious. Molière’s widow asked Louis XIV if her spouse could be granted a ‘normal’ funeral at night. The King quietly agreed. Molière was most probably buried in a dark corner of Saint Joseph Cemetery which had been reserved for those who had committed suicide or those who had not been baptized.

To remove Molière from St Joseph to Père Lachaise therefore presented the authorities with a particular problem: which one was his corpse? It has been suggested that the commissioners in charge simply dug up a random skeleton from the plot and introduced him as Molière. The same was done for De La Fontaine (despite the fact that the poet had been buried in a different cemetery). Molière’s sarcophagus in Père Lachaise bears his name but does not contain his body. The alleged tooth, jawbone, and vertebra of the playwright, which had once been honoured as relics, probably were taken from the ‘false’ Molière as well. 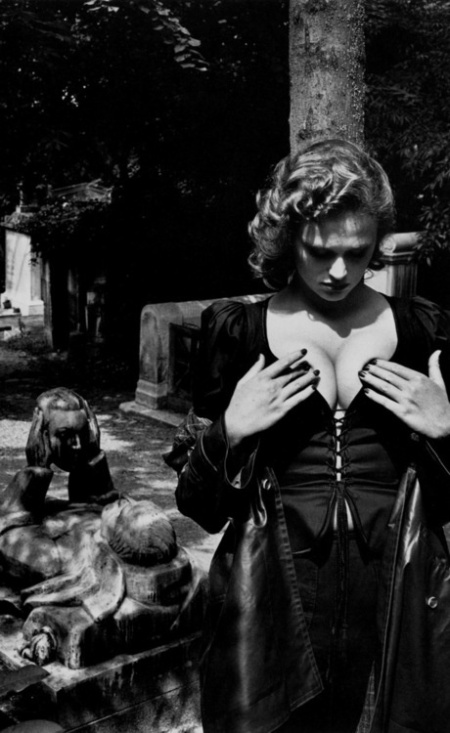 Nicholas Frochot’s plan worked out well. In the years 1820 to 1830, the cemetery became fashionable amongst the Parisian upper middle class. Everyone wanted to be seen dead in Père Lachaise. Among the famous residents stand the tombs of Honoré de Balzac, Guillaume Apollinaire, Frédéric Chopin, Jim Morrison, Alfred de Musset, Edith Piaf, Oscar Wilde, Sarah Bernhardt, Marcel Proust and, of course, Frochot himself. Apollonie Sabatier is buried in the old cemetery of Neuilly-sur-Seine, but many of the celebreties who frequented her salon on Rue Frochot were later buried at Père Lachaise. If life is indeed a preparation for death, then Sabatier assisted her guests in a fine manner for their departure and final meeting with Frochot/Lachaise.