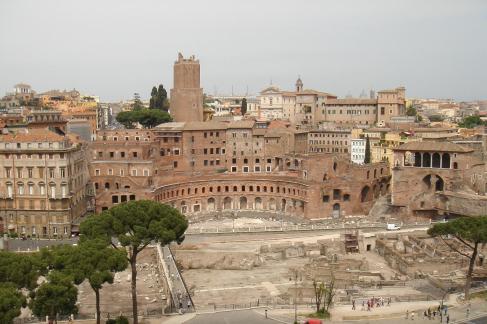 The Forum Romanum, at the heart of Ancient Rome, was in the seventeenth century populated by cows, goats and cattle traders – hence the name Campo Vaccino, the ‘field of cows’. In his 1636 ‘Vue du Campo Vaccino’, Claude Lorrain painted the hustle and bustle as seen from Capitoline Hill, with the Colosseum in the distance on the left. This is Claude’s only topographically correct cityscape that has been recorded. 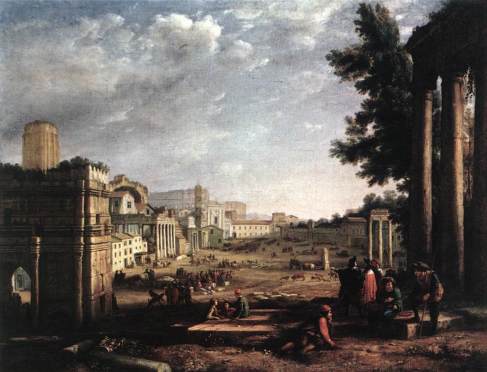 French painter and engraver Claude Lorrain – born Claude Gellée, dit le Lorrain – is one of the great painters of the French Baroque. Along with his friend Nicolas Poussin, he defined the classicizing tendencies of the era. Claude was born into a peasant family in the Duchy of Lorraine which, at the time, was an independent region. His childhood was marred by the mounting hostilities with invading France. Jean and Anne Gellée were the owners of a small plot of land and unable to give their son the privilege of an academic education. His training was not in the art of painting. Young Claude was initially apprenticed to a pastry cook. Throughout his life, he experienced difficulty reading and writing. He left home in 1612 and travelled to Germany, before moving on to Rome where he became a studio assistant to landscapist Agostino Tassi. He visited Naples and returned to Nancy before settling permanently in Rome around 1628. 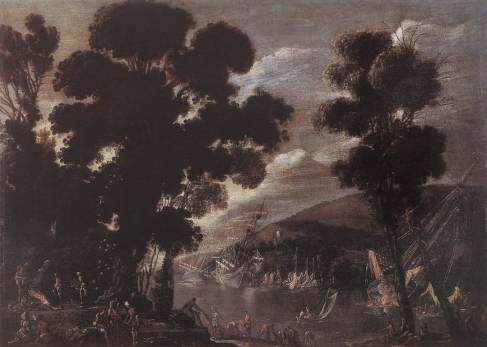 Building on the foundation laid for him by northern European immigrant artists such as Titian, Elsheimer, Paul Bril, Claude became a leading seventeenth century landscapist. His paintings are points of reference in this particular genre. He was also a superior draftsman, and his spontaneous sketches of nature are equally appreciated amongst critics and art lovers. Over 1,000 extant drawings have been attributed to him. Some of his most interesting drawings include those he executed for his Liber veritatis (Book of Truth), now in the British Museum. In 1635/6 he had started cataloguing his works, making tinted outline drawings of all his pictures on the back of which he made a note of the purchase’s name. It was a shrewd effort by this French farmer’s son to keep an increasing number of forgers of his work at bay. The Liber veritatis was the first document of its kind in the history of art. 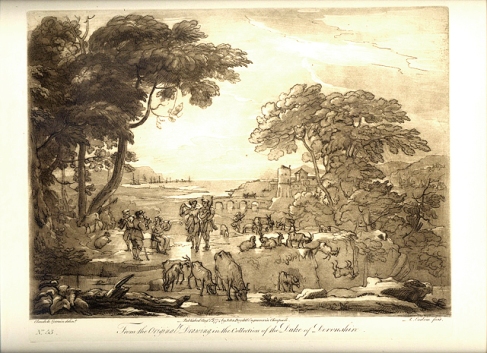 In Rome, it was not until the mid-seventeenth century that landscapes were deemed fit for serious painting. Northern Europeans working there had made such views pre-eminent in some of their paintings, but it was not until the efforts of Annibale Carracci that landscape became the focus of a major Italian artist. In ‘The Sacrifice of Abraham’ (ca.1600) the subject that justifies the title occupies a minor place. 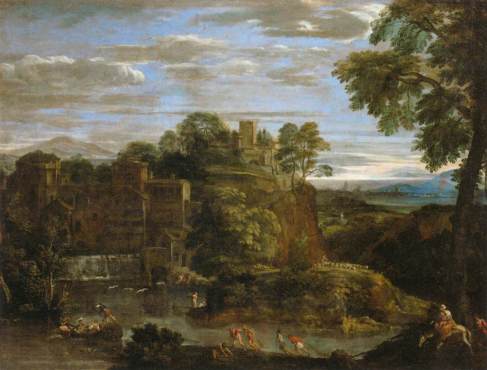 The centrepiece is a tree growing at the edge of a precipitous bluff, whilst great attention is given to the mountains in the distance, and to the clouds floating over the horizon. The scene of Abraham about to bring down his dagger over the neck of the kneeling Isaac is lodged in the top left corner, almost as an addition. Carracci’s disciple Domenico Zampieri, known as Il Domenichino, reserved an even more modest space for ‘The Flight to Egypt’ (1621/3). A tiny Mary riding a donkey, followed by Joseph, appears in a corner at the bottom of the composition. Religion seems an excuse to a painter who is eager to depict nature as he sees it. Nevertheless, the stated themes of the paintings remain religious. 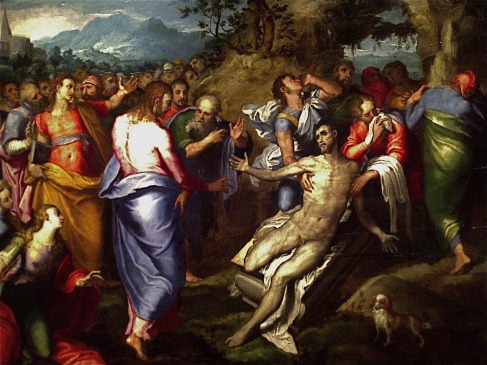 Albrecht Dürer may have drawn some of the most superb landscapes of European art, but most painters rejected landscape as un-classical and secular. The former quality was not in line with Renaissance art which tried to emulate the work of the ancients. The second quality found little patronage in Counter-Reformation Rome, which – with papal interference – demanded grand subjects worthy of ‘high painting’. Landscape for its own sake reflected an aesthetic approach regarded as lacking in moral seriousness. Rome, the theological centre of Italian and European art, fought to hold on to the past. A hierarchy of subjects, which included classical, religious, mythological and allegorical themes, placed history painting above all other genres. Portraits, scenes of everyday life, still life, and landscapes were seen as inferior topics. Even as landscapes became accepted as subjects in the course of the seventeenth century, they were still often created as settings for biblical, mythological, or historical scenes. The narrative was of overriding importance.

Since Antiquity, artists had gone to Rome to complete their training, but by the end of the sixteenth century different developments combined to give rise to a new profane genre. Crucial factors were the presence of a cosmopolitan community of artists (especially from the Low Countries); the attraction of Rome to visitors and the emergence of ‘tourism’; the impact of printmaking on the circulation of images (with Antwerp as a centre of European distribution); the increasing interest in works by Renaissance masters; and the growing commercial success of landscape painting. By the mid-seventeenth century, the genre had become a category in its own right. Claude Lorrain stood at the centre of these changes. His style of painting and the subjects he favoured are consistent throughout his oeuvre, but that is not to say that there is no evolution in his art. His early paintings are steeped in the northern European landscape tradition, complete with a variety of picturesque details. Young Claude spent long days roaming the Roman countryside, making numerous sketches which formed the basis for oil paintings to be completed in his studio. As he matured his paintings became increasingly classical in tone and theme. 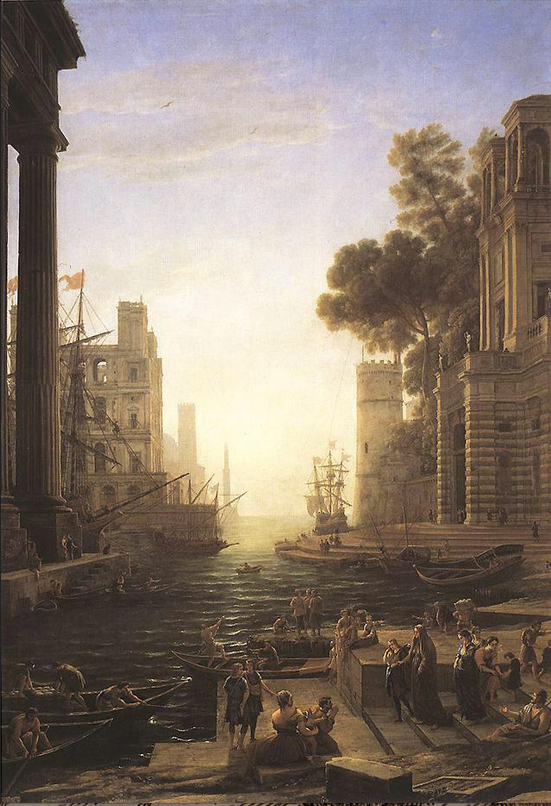 Later works exude a more melancholic atmosphere than his bustling early pictures. He painted a pastoral world of fields and valleys not distant from castles and towns. If the ocean horizon is represented, it is from the setting of a busy port. Perhaps to feed the public’s desire for paintings with noble themes, his pictures include demi-gods, heroes and saints. Even though his sketchbooks prove that he was more interested in pure scenography, Claude cunningly met this demand. Claude’s paintings flattered the culture of his clients by alluding to the Classics or Bible, while at the same time teeming with anachronisms in order to more closely resemble contemporary Roman landscapes for their nostalgic enjoyment.

In ‘Paysage avec l’embarquement de Sainte Paule à Ostie’ (1639), for example, the port is filled with modern ships that sailed around the Italian coast. European painting is full of similar anachronisms in the depiction of historical themes. As late as the early twentieth century Giorgio de Chirico introduced his deceptive ‘exploitations of tradition’ by inserting modern smoke stacks and trains into the background of seemingly ancient cityscapes.
In the second quarter of the seventeenth century, European landscape painting took two opposite directions. Artists like Claude went in for ‘ideal’ views of an eternal Arcadia, while the Dutch masters of the genre (the word landscape is borrowed from the Dutch ‘landschap’) closely observed nature. The introduction of the term was logical because the Netherlands was one of the first places that landscape had become a popular subject for painting. 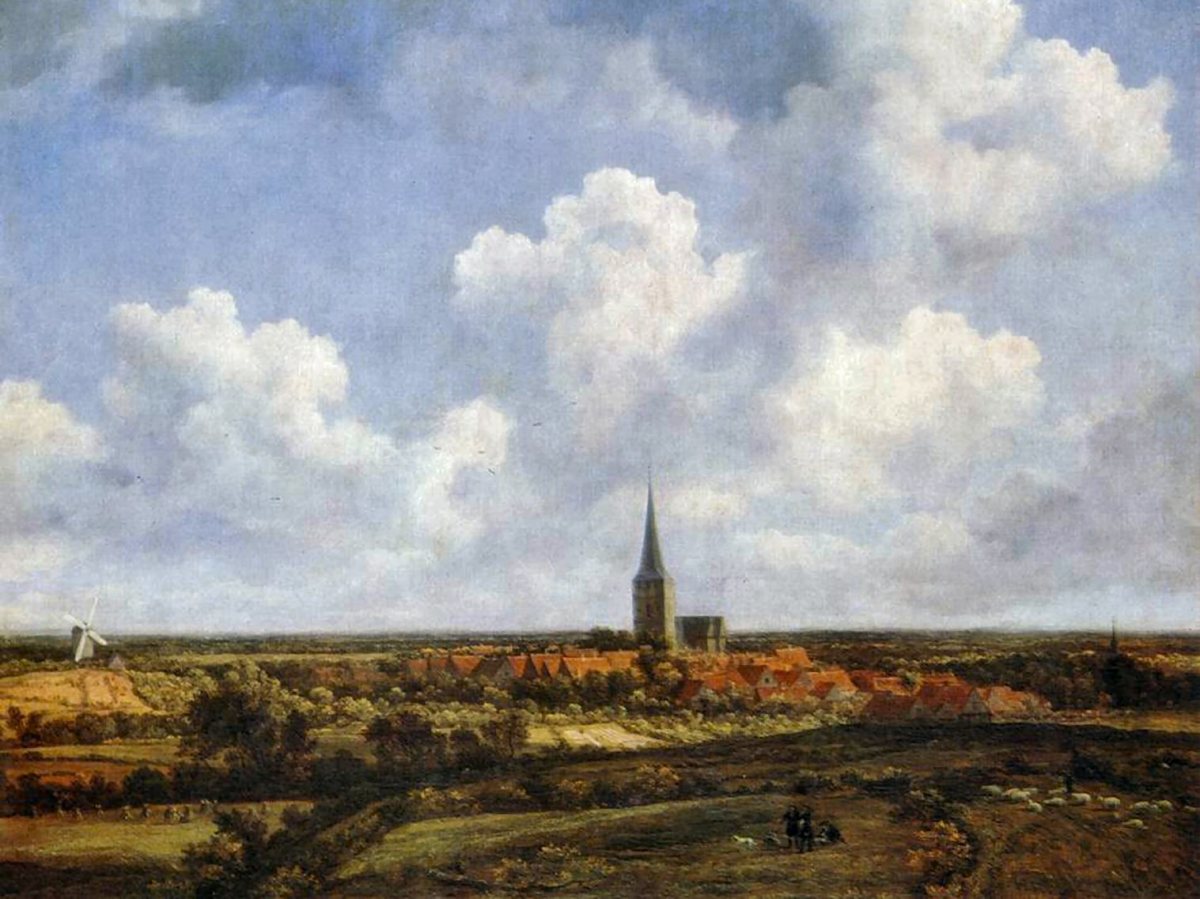 The rising Protestant middle class sought secular art for their homes, creating the need for new subjects to meet their tastes. Landscapes helped fill this need. Claude Lorrain’s paintings on the other hand exemplify the genre labelled as ‘idealized’ landscape. They are rooted in a strong naturalism, but at the same time beautified and idealized. A sense of nostalgia is evoked by the presence of ancient ruins and figures in antique togas. The palette is one of blues (using ultramarine, the most expensive pigment of his day made from lapis lazuli, a rare precious stone), greens and greys. Much like the later Impressionists, Claude was fascinated by the effects of light. His preference was for harmonious scenes of dawn or twilight, whilst never showing nature’s brute realities. He searched for perfection, an image of nature as it should be. He created ‘une mythologie douce’, an aesthetic that chooses the bucolic over the shocking, and withdrawal from the world over the torments of war. He desired the peaceful song of the flute rather than the military sound of drums. This kind of approach appealed to his audience. Landscape painting may have been perceived as a lesser genre in certain circles, but Claude Lorrain achieved enormous success in his lifetime, garnering commissions from aristocrats, popes, and the King of Spain Philip IV. 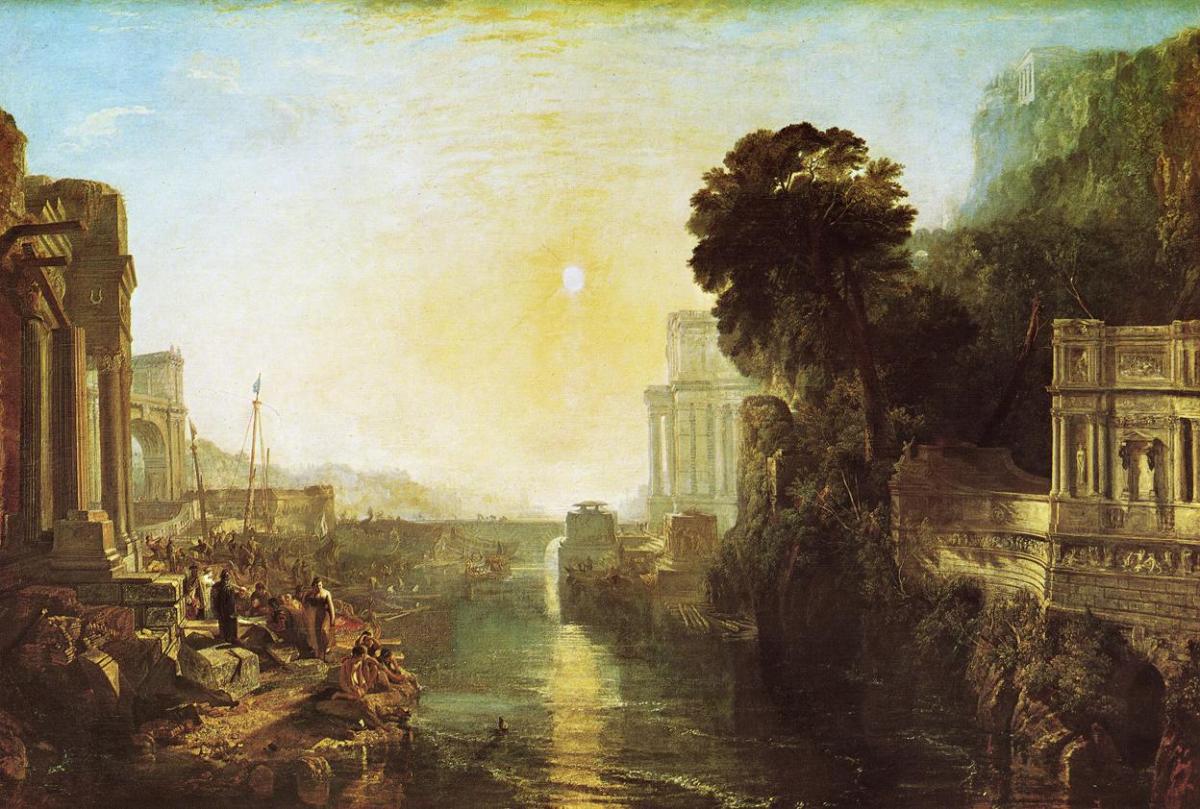 Scottish and English travellers on the eighteenth-century Grand Tour bought many of his works. As a consequence, Claude exerted considerable influence on English landscape artists of the eighteenth and nineteenth centuries. Turner was especially indebted to him, and – in a classic case of creative rivalry – tried to outdo Claude’s grand compositions. The Turner Bequest is the name given to the gift of a large number of paintings and drawings which the artist made posthumously to the nation. Most of these works are now in Tate Britain and some are hung in the National Gallery. In his will the artist specified that he wanted his ‘Dido building Carthage’ to be hung between Claude’s
‘L’Embarquement de la Reine de Saba’ and ‘Le marriage d’Isaac et Rebecca’ – works which formed the prime inspiration for his painting.
The late development of ‘pure’ landscape painting justifies the conclusion that the genre was preceded by the cityscape. In retrospect, that is not surprising. Buildings, streets and cities are man-made, manifestations of human pride and hubris. An inhabitant of Florence, Antwerp or Bruges would be eager to boast the achievement of builders, sculptors and artists who had contributed to the beauty of his/her city. Mankind was on the move – for the first time the proud notion of progress entered our thinking. Moreover, the artist attempting to depict the elegant architecture and buzzing street life of his day was not burdened by this load of religious or mythological baggage that the landscapist carried with him. He was not concerned with moral seriousness or religious high-mindedness. His eyes were focused on the here and now, on the beauty that surrounded him, on the energy that captivated him. Painting was an expression of civic pride. Such urban pride was also reflected in a different type of cityscape. Between the mid-sixteenth and the early nineteenth century, many of the great cities of Europe applied the artistic tradition of the cityscape to their coins and medals – the most circulated art medium. These coins not only expressed urban pride and civic power, but also showcased exquisite skills of engraving. The images feature churches, citadels, fortifications, harbours, and civic buildings, emphasizing military or commercial power, and above all, divine protection and favour. Again, Antwerp stood at the centre of developments. 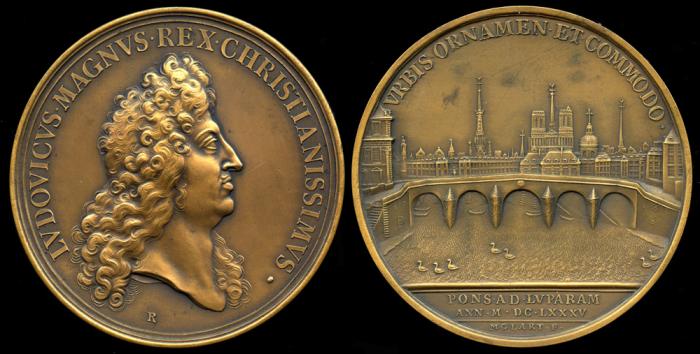 The Roman Catholic Roettiers family of engravers, goldsmiths and medallists came to prominence with Philip Roettiers (born in 1596). He was a goldsmith by training and a medallist by specialty. Philip was the founder of a dynasty of engravers and medallists who for two centuries were of service in various capacities to the kings of England, Spain, and France. 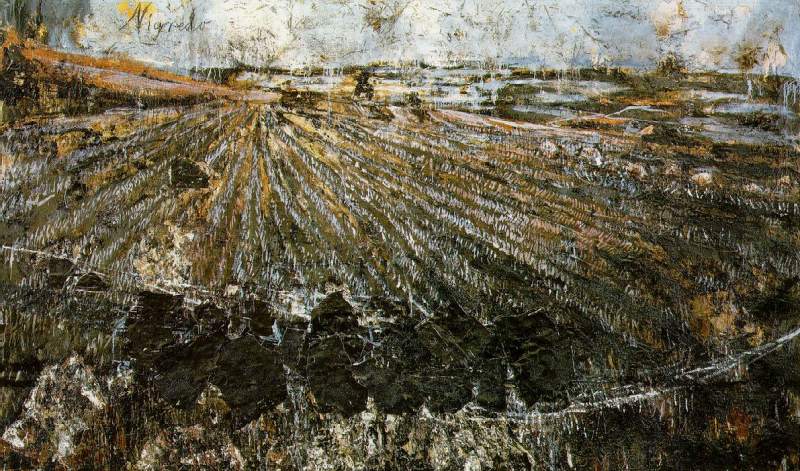