Medieval urban life held many hazards. There was no common law of the land. Regulations were set by the lord of the manor or by the mayor and his council in towns and cities. The streets of London were perilous and fraught with danger. Life was cheap and tempers were short. There were fights and assaults in the street, knifings in the tavern, and beatings in the home. Criminals received a quick trial and, if found guilty, they were dealt with immediately. In order to exercise some control, the town authorities imposed a curfew at night. After the bell had rung, it was expected that all townspeople were in their homes for the night. The city gates were locked. Anyone found outside their house would be challenged by a night watchman. Everyone in town had a duty to raise the alarm if they saw a crime being committed. The city offered protection and a limited degree of freedom to its citizens by imposing a strict system of compulsion and regimentation.

Catherine Wheel Alley is a tiny street leading to the hurly burly of Bishopsgate and into the market environment of Middlesex Street in Spitalfields. Today we associate the Catherine wheel with a type of firework consisting of a powder-filled spiral tube, mounted with a pin through its centre. When ignited, it rotates quickly, producing a display of sparks and coloured flames. Fireworks are of ancient Chinese origin. They were used in crude form in medieval times in Europe to celebrate military victories or royal occasions.

More refined kinds of fireworks, such as the Catherine wheel, are first recorded in the eighteenth century, and it was not until the nineteenth century that new ingredients, such as magnesium and aluminium, could be added to the staple gunpowder base to achieve a colourful display. The name occurs in the history of printing as well. Thomas Creede was a London printer. In 1593 he opened his own printing house at the sign of the Catherine Wheel, near the Old Swan public house in Thames Street. At this establishment he produced a number of significant literary works, including the first quarto editions of Shakespeare’s Henry VI (1594) and Henry V (1600).

In medieval days the Catherine (or breaking) wheel was a torture device used for capital punishment. A public execution at the time was a big public occasion and as such it was considered a triumph of the law. Every aspect of the process was carried out with military precision. Torture was not an act of blind savagery. It was a horror show, a play with a moral, and a strictly regulated practice. It was a skill, not an expression of rage. The pain to be inflicted was measured carefully. It ranged from the immediacy of decapitation to the slowly inflicted pain limits of quartering. The art of putting the hellish visions of Hieronymus Bosch into practice was experienced as a crowd-pleaser.

Torture was a work of art. It was what Dostoevsky called ‘artistically cruel’, the penal system’s equivalent to Dante’s poetry. If the crowd gathered round the scaffold, it was not simply to witness the sufferings of a condemned man. This was real life drama. To hear someone curse the authorities was worth waiting for. Death-by-torture allowed the condemned person this sudden freedom where nothing was censored and all could be expressed. The ceremony of dismemberment was the climax of procedures which was eagerly awaited by the crowd. Even after the convict’s death, torture continued. Heads were put on spikes for public display, body parts stolen, corpses burnt, and ashes thrown in the wind. The festival of cruelty seemed never-ending. Capital punishment comprised many kinds of death. Some convicts were hanged. Those who had committed a more serious crime were condemned to be broken alive and to die on the wheel, after having their limbs broken. Some were to be broken until they died a natural death, others to be strangled and then broken. Another option was to be burnt alive which was sometimes preceded by strangulation, on other occasions not. Some serious offenders were drawn by four horses, or had their head cut off. There were no barriers to savagery. It was mostly manual work, done by hand – the hand of the executioner.

The office of professional hangman did not exist in the early Middle-Ages but dates back to the late thirteenth and early fourteenth centuries with the development of new judicial procedures and more elaborate corporal punishments that were to shape criminal justice through the early modern period. Prior to this time the court basically arbitrated a private settlement between the victim and the offender in which the former or his/her family received a compensation that corresponded to their social status. When executions did occur they were carried out by a variety of people, all of whom were amateurs: by the accuser himself, by a member of the family, sometimes by a juryman or by the beadle. In the course of time governmental authorities became more actively involved in criminal proceedings. Corporal punishments resulted increasingly from the attempt by public authorities to monopolize the legitimate use of violence in the hands of government. The creation of the office of the trained executioner was a consequence of these developments. His rise coincided with increased criminalization in society which concerned unfortunate groups such as beggars, vagrants, or prostitutes. The rapid expansion of the city made his role all the more powerful. He became a central figure in early urban crowd control and crime prevention.

Where does the name Catherine wheel come from? At the age of eighteen, Catherine of Alexandria, known as Saint Catherine of the Wheel, paid a visit to Emperor Maximus II. She hoped to persuade him to stop persecuting Christians. Whilst at the court, she succeeded in converting his wife. The Emperor was furious and Catherine was condemned to death on the breaking wheel. This torture instrument broke when she touched it, so she was beheaded instead. Her symbol became the spiked wheel, known as the Catherine wheel. In 1063, the Order of the Knights of St Catherine was formed with the aim of protecting pilgrims on their way to and from the Holy Sepulchre. These knights wore a white habit embroidered with a Catherine wheel traversed with a sword, stained with blood. It seems unlikely, but the Catherine Wheel became popular as a tavern name. By using the saintly sign, the publican suggested that he would protect his customers from any unpleasantness in his inn, just as the knights of St Catherine protected pilgrims from highwaymen. The name lives on in Catherine Wheel Alley, East London, leading to Petticoat Lane Market. For over 300 years the galleried Catherine Wheel inn stood here until it was destroyed by fire in 1895. During the early part of the eighteenth century this public house was one of the secretive haunts of Dick Turpin. At some point in its long history the name of the pub was changed to the Cat and Wheel in order to pacify Puritans who objected to the name association with a saint.

The accession of Elizabeth I put an end to years of Catholic restoration under Queen Mary. With the passing of the 1559 Act of Supremacy she declared herself Supreme Governor of the Church of England. The act included an Oath of Supremacy which required anyone taking public or church office to swear allegiance to the monarch as head of Church and state. Those who refused to take the oath could be charged with treason. During that same year Philip II established the University of Douai with the purpose of preserving the purity of the Catholic faith from the errors of the Reformation. Soon there were English, Scottish and Irish colleges and the university became the chief centre for exiles, including many young men from Oxford and Cambridge who remained loyal to the old faith (to this very day there is an Irish College in Louvain). The purge of universities created a remarkable Catholic diaspora in the Southern Netherlands. Douai, located on the River Scarpe some twenty miles south of Lille, became the most important recusant centre on the European mainland. During the first decade of Elizabethan reign more than a hundred senior members of the University of Oxford alone left for Louvain and Douai. 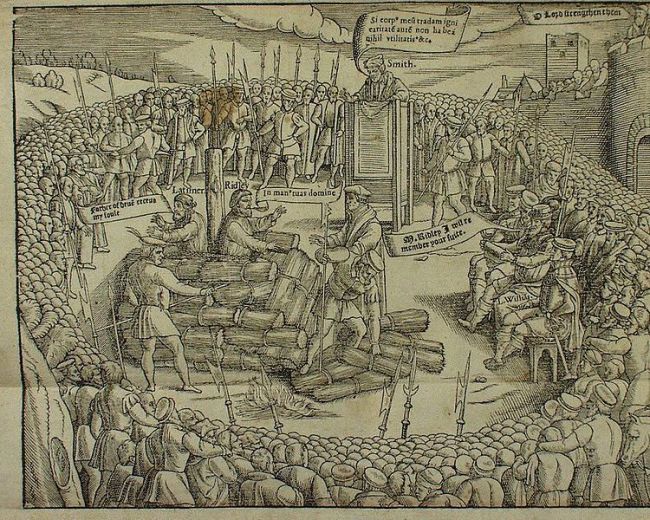 There is some irony in the fact that four Catholic activists were arrested in the Catherine Wheel tavern in Oxford, before being put through a horrendous ordeal. Thomas Belson had matriculated in 1580 at Oriel College but, like so many other Catholics of his generation, never graduated in order to avoid taking the Oath of Supremacy. Instead, he continued his studies at the English College at the University of Douai, which had been founded by William Allen in 1568. The latter was a former Principal of St Mary Hall, Oxford, but had to resign his post in 1560 with the Elizabethan persecution of intellectuals. He became the spiritual leader of the English community in the Low Countries and was one of many exiled authors who produced a sheer endless list of recusant publications. Many British students were groomed in Douai to undertake missionary work at home with all the dangers that task involved. The authorities in England were highly suspicious of the activities of the refugee community. By the time Elizabeth died, 450 Douai priests had served on an English mission, and 110 of them had been executed. Little is known of Belson’s activities until June 1585 when he was imprisoned in the Tower of London. He had been one of those who were involved in assisting the recently converted Philip Howard, 1st Earl of Arundel, in his attempt to leave for the Continent. On his release he continued liaising between exiled Catholics on the Continent and England. On 18 May 1589 Belson was arrested at the Catherine Wheel, together with two priests who had been with him at Douai, George Nichols and Richard Yaxley, and a servant at the inn, Humphrey Prichard. The four men were taken on horseback to London, where they were tortured and interrogated. After six weeks they were sent back to Oxford, tried, and found guilty. All four were executed on 5 July 1589, the two priests hanged, drawn, and quartered for treason, Belson and Prichard hanged as felons. The brutality of the executions shocked the local population and it took twenty years before another priest was executed in Oxford.