Photographer Oscar Gustaf Rejlander was born in 1813 in Sweden, but nothing is known about his early life. He apparently studied art in Rome in the 1830s and supported himself there by working as a portrait painter and copyist of old masters. He was in England by 1841. In 1845 he had settled at no. 42 Darlington Street, Wolverhampton, where he opened a painter’s studio. He took up photography in 1853 and two years later began to exhibit his photographic compositions consisting of portraits, landscapes, nudes, anatomical studies, and subject pictures. 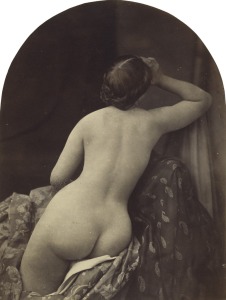 His genre photographs earned him the reputation as one of Britain’s leading photographers. His ‘Night in Town’ (also known as ‘Homeless’), depicting a child in rags huddled on a doorstep, was used by the Shaftesbury Society for over a hundred years to highlight the plight of homeless children. In the spring of 1862 Rejlander moved to London and settled in Malden Road, Chalk Farm. On the relationship between photography and painting, he insisted that artists had as much to learn from photography about observation and draughtsmanship as photographers had to learn from painting about composition and expression. Contemporary critics described him as ‘the father of art photography’. As a portraitist Rejlander photographed several illustrious sitters, including Alfred Tennyson, Charles Dodgson (Lewis Carroll), Henry Taylor, Charles Darwin, Gustave Doré, and Prince Albert. In 1868 he opened a richly furnished studio opposite Victoria Station. It was soon after this move that Charles Darwin entered his shop. Rejlander supplied Darwin with nine illustrations for his The Expression of the Emotions in Man and Animals (1872). The photograph illustrating ‘mental distress’, that of an infant boy wailing, known as ‘Ginx’s Baby’ after the popular novel by James E. Jenkins, became a best-seller. He died in January 1875 at his home at no. 23 East Cottages, Clapham.