The London Symphony Orchestra (LSO) is the oldest of the capital’s orchestras and the first British orchestra owned by its players. As a self-governing body, LSO gave its first concert on 9 June 1904, conducted by Hans Richter (the first principal conductor until 1911) at Queen’s Hall, Langham Place, Westminster. Since 1982, the orchestra has been permanently based in the Barbican Centre. Among conductors with whom it is most associated are, in its early days, Hans Richter, Edward Elgar, and Thomas Beecham. In more recent decades Pierre Monteux, André Previn, Claudio Abbado, Colin Davis and Valery Gergiev have been working with the orchestra. Simon Rattle will take up his position of musical director from September 2017. The creation of LSO was the result of a musical uprising in which immigrant musicians played a prominent part.

At the turn of the twentieth century there were no permanent salaried orchestras in London. Musicians were contracted on an individual basis. Since there were competing demands for the services of performers and no binding contracts, a player was free to accept a better-paid engagement at any time. He (it was male dominated profession) would simply hire another player to deputise for him at the original concert. In September 1903, Robert Newman, the manager of the Queen’s Hall, and the conductor of his promenade concerts, Henry Wood, unilaterally decided to end this chaotic system. In response, approximately half of its players resigned from the Queen’s Hall Orchestra. Musicians were not highly paid, and removing the opportunity of more lucrative engagements was a financial blow to many of them. Some of the leading players decided to form their own orchestra.

The principal movers of the initiative were horn players Adolf Borsdorf, Thomas Busby, and Henri van der Meerschen, and trumpeter John Solomon. As performers these men were highly regarded and referred to as ‘God’s Own Quartet’. Busby organised a meeting in which he set out the principles. A new ensemble named the London Symphony Orchestra was to be run on co-operative lines, something ‘akin to a Musical Republic’. Members would share in the orchestra’s profits at the end of each season. The proposal was approved unanimously. Newman held no grudge against the rebels, and made the Queen’s Hall available to them. He and Wood attended the LSO’s first 1904 concert which included the prelude to Die Meistersinger, music by Bach, Mozart, Liszt, Elgar, and finally Beethoven’s Fifth Symphony. German music ruled the capital.

Henri Louis van der Meerschen was born in Brussels on 30 September 1866. He attended the Brussels Conservatoire studying under Louis-Henri Merck. There he earned the Premier Prix with distinction in 1885 after which he was invited by Bruges-born Eugène Goossens to become a member of the celebrated Carl Rosa Opera Company at Drury Lane. This company had been founded by Hamburg-born Karl Rose with the aim of producing operas in English. The British premier of Puccini’s La Bohème and Madame Butterfly were among his successes. He was also the outstanding performer of Wagner at the time, presenting The Flying Dutchman (1876), Rienzi (1879), Lohengrin (1880), and Tannhäuser (1882) to an English audience. Having joined Henry Wood’s Queen’s Hall Orchestra, Van der Meerschen was one of the four rebels who initiated the foundation of LSO. 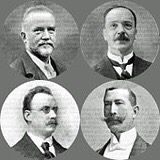 In 1914 the LSO had just reached its tenth birthday. Financially sound and artistically refined, the orchestra was acknowledged to be among the finest in the world. The outbreak of war intervened. Conductors and musicians cancelled tours and performances because they were unable to travel; some members of the orchestra were enlisted. In spite of difficulties, LSO declared that it would continue playing concerts. By 1916 the situation became more problematical. Grave news from the front spread gloom and pessimism at home. The Zeppelin bombardment of London kept audiences indoors. At the start of the year conscription had been imposed. By July 1917 thirty-three members of the orchestra (about a third of its male membership) were sent to the trenches for active service. An increasing number of female players acted as their replacements.

Traditionally, the LSO had strong German roots and preferences. In 1915 it had initiated a successful ‘Three Bs Festival’: Bach, Beethoven and Brahms. An attempt to repeat the treat in 1916 hit the brick wall of a hostile press and public opinion. In September 1916 the Pall Mall Gazette attacked the orchestra in a crusading series of articles for the overwhelming presence of German music in their repertoire. It argued that those in London ‘who have felt war in their skins are not to be drugged with sound, however sweet’. LSO was forced to present a more patriotic, if not jingoistic program of performances.

Edward Elgar, who had been LSO’s principal conductor during 1911/2, was living in London at the outbreak of war. In 1914 he was asked to contribute to an anthology called King Albert’s Book to raise money for Belgian refugees affected by German occupation. Brussels-born playwright, poet and translator Émile Leon Cammaerts had moved to England in 1908. He translated works by John Ruskin into French and selected a number of G.K. Chesterton’s Father Brown detective stories in La clairvoyance du père Brown. In 1933 he was appointed Professor of Belgian Studies at the University of London. He married actress Helen Tita Braun (stage name: Tita Brand), a daughter of the Wagnerian diva Marie Brema (who was born Mary Agnes [Minnie] Fehrmann, the daughter of merchant from Bremen in Liverpool). Elgar set Cammaert’s poem ‘Après Anvers’ to an orchestral accompaniment. It was premiered under the name of Carillon by the LSO on 7 December 1914 at the Queen’s Hall. The composer himself conducted and Tita Brand recited the poem. It roused anti-German spirits at the time and was revived for the same reason during World War II with a new text by Laurence Binyon. 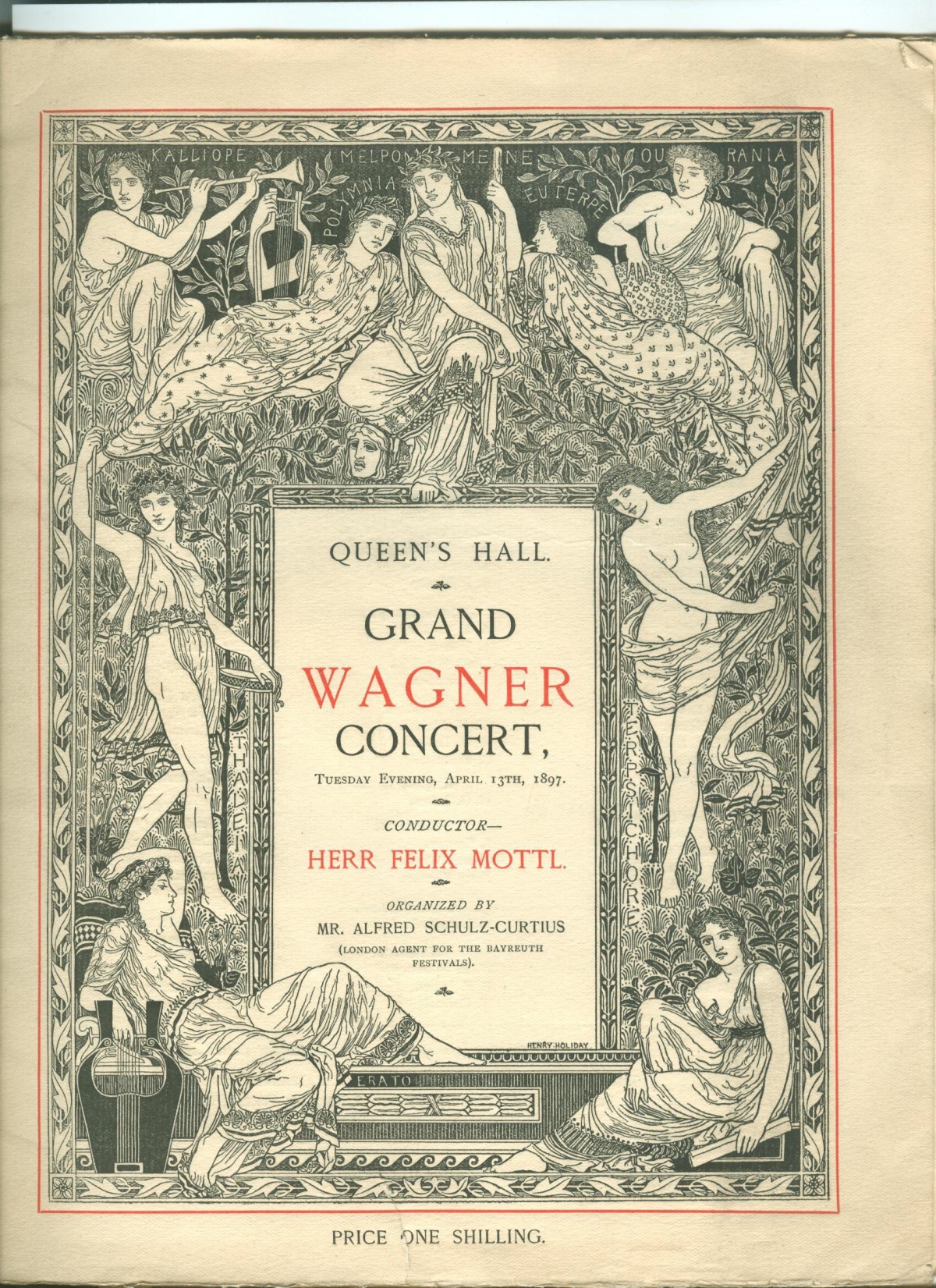 For resident German musicians in Britain the war years were a bitter and painful experience. Impresario Alfred Curtis was born Alfred Schulz-Curtius around 1853 in Germany. He settled in London in the early 1870s. He founded a music and artists’ management agency at no. 44 Regent Street, Piccadilly Circus, in 1876. He was the first to bring Richard Wagner’s music to the London public. In 1882, he arranged the British staging of the Ring Cycle under the Hungarian conductor Anton Seidl. During decades of professional activity, Schulz-Curtius organised dozens of concerts in London’s venues and worked with many of Europe’s major conductors and performers. At the beginning of the First World War he was arrested and interned as an enemy alien, despite of having become a naturalised British subject in 1895, and changing his name by deed poll to Alfred Curtis in September 1914. He died in March 1918.

Adolf Borsdorf was one of the leading figures in the rebellion against Newman and Wood in 1903/4 and the subsequent foundation of the LSO. Born on 25 December 1854 in Dittmansdorf, Saxony, he studied French horn at the Dresden conservatory and played in a military band. In 1879 he moved to London where he stayed for the rest of his life. He was appointed Professor at the Royal College of Music, South Kensington, when it was founded in 1882. He was playing principal horn in the orchestra that Henry Wood conducted at the first Promenade Concert in the Queen’s Hall in 1895. He was also in the orchestra when Richard Strauss’s Till Eulenspiegel was given its first English performance in 1896 with the composer conducting. Enjoying an international reputation, he used his influence to secure Hans Richter to conduct LSO’s first concert. 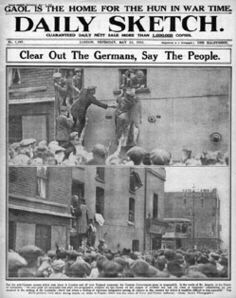 The intensity of anti-German feeling during of the First World War would deeply hurt him. At the outbreak of hostilities, he had been living in London for more than thirty years and his wife was British. In spite of that, the members of the orchestra turned against him. They requested his removal from their ranks. By October 1915 he was told that he would not be allowed to play again until the end of the war. In November he felt forced to resign from an orchestra he himself had helped to create and to flourish. Borsdorf never performed professionally again. He died in April 1923. His vital contribution to London’s musical culture in general and to raising the standard of British horn playing in particular was only recognised in retrospect. The risk of whipped up patriotism is that it quickly runs sour. In becoming an expression of resentment rather than pride, the spirit of tolerance is sacrificed.