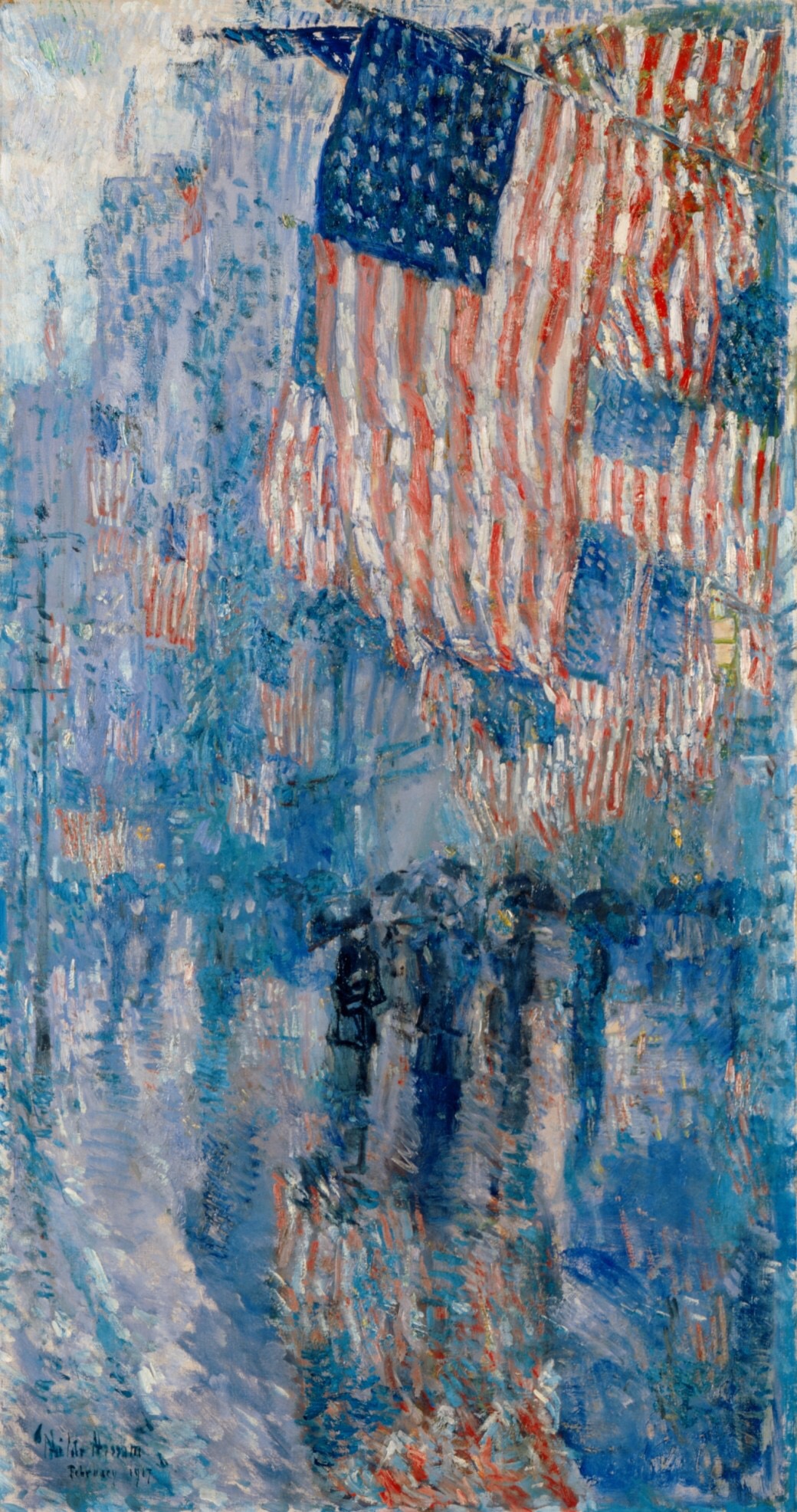 On the early battlefield flags served the purpose of identification. They gave the protection to those fighting within a single unit and enhanced their chance of survival. During the Crusades a variety of regimental flags were carried by a multi-national company of knights and soldiers as identification signs for individual groupings. Alfred Altdorfer’s _Alexanderschlacht_ (1529) provides a splendid image of the tactical use of military banners. In battle, the fall of one’s flag meant surrender, defeat, death. Enemy flags were coveted as booties as their symbolic value allowed for hype and bragging. Since early armies were made up mainly of mercenaries, the flag was of no particular emotional significance to the individual fighter. The flag’s function was predominantly utilitarian. The complex process of communication in shipping channels gradually gave rise to a standardized language of flag signals to promote safe navigation.

All this changed on the eve of Romanticism. The transformation was hurried along by the mechanization of (uniformed) warfare in which the flag as rallying point was no longer needed. Having lost its strategic purpose, the flag acquired wider allegorical significance. In 1830 Eugène Delacroix painted his political masterpiece La Liberté guidant le peuple. It is considered the ultimate image of the French Revolution without portraying the events of 1789 itself. Instead the artist commemorated the July Revolution which toppled Charles X. The painting presents a woman personifying the Goddess of Liberty who leads her followers forward over a barricade of dead bodies, holding the tricolore in one hand (now the national flag), and a bayonetted musket in the other. Liberty, also known as Marianne, is a symbol of France and the French Revolution. Another minute flag can be seen in the distance flying from the towers of the Notre Dame. The painting is the iconic image of both the ecstasy and sacrifice that revolution represents. The flag embodies the ideals of liberty and equality.

With the stoking of patriotic passion emerged the desire to display the flag as a symbol of civilian passion and emotion. Little more than piece of fabric (the introduction of silk allowed for the popularization of flags), colours and image of the national flag were nurtured as expressing the (racial) identity, ideas, and feelings of the society it represents. Most European countries adopted their national flag in the course of the nineteenth century (Netherlands in 1813, Greece 1822, Switzerland 1889). The frenzy for the flag is a relatively recent phenomenon. Artistic representation ran more or less parallel to political developments. In 1867 Claude Monet painted Jardin à Sainte-Adresse (a seaside resort near Le Havre). It was his first masterpiece. A holiday scene of family members painted in ‘plein air’, the painting was exhibited at the fourth Impressionist exhibition of 1879. From an elevated viewpoint Monet painted the terrace, sea, and sky as three distinct bands, vertically organized by two fluttering flags in the breeze. The image celebrates leisure and relaxation. The technical challenge Monet had to overcome was to suggest atmospheric conditions on canvas. He succeeded in making wind visible. Having raised the weather flag, he initiated his generation’s passion for pennant-painting. The emotive commemoration, , added a new aspect to the flutter of flags. Having been declared a national holiday by the French government, the festivities marked the restoration of national pride after the humiliation of the Franco-Prussian War and the schismatic events of the Commune. France gathered around the tricolore. The flag represented unity and patriotism. French flag-waving inspired an American visitor. 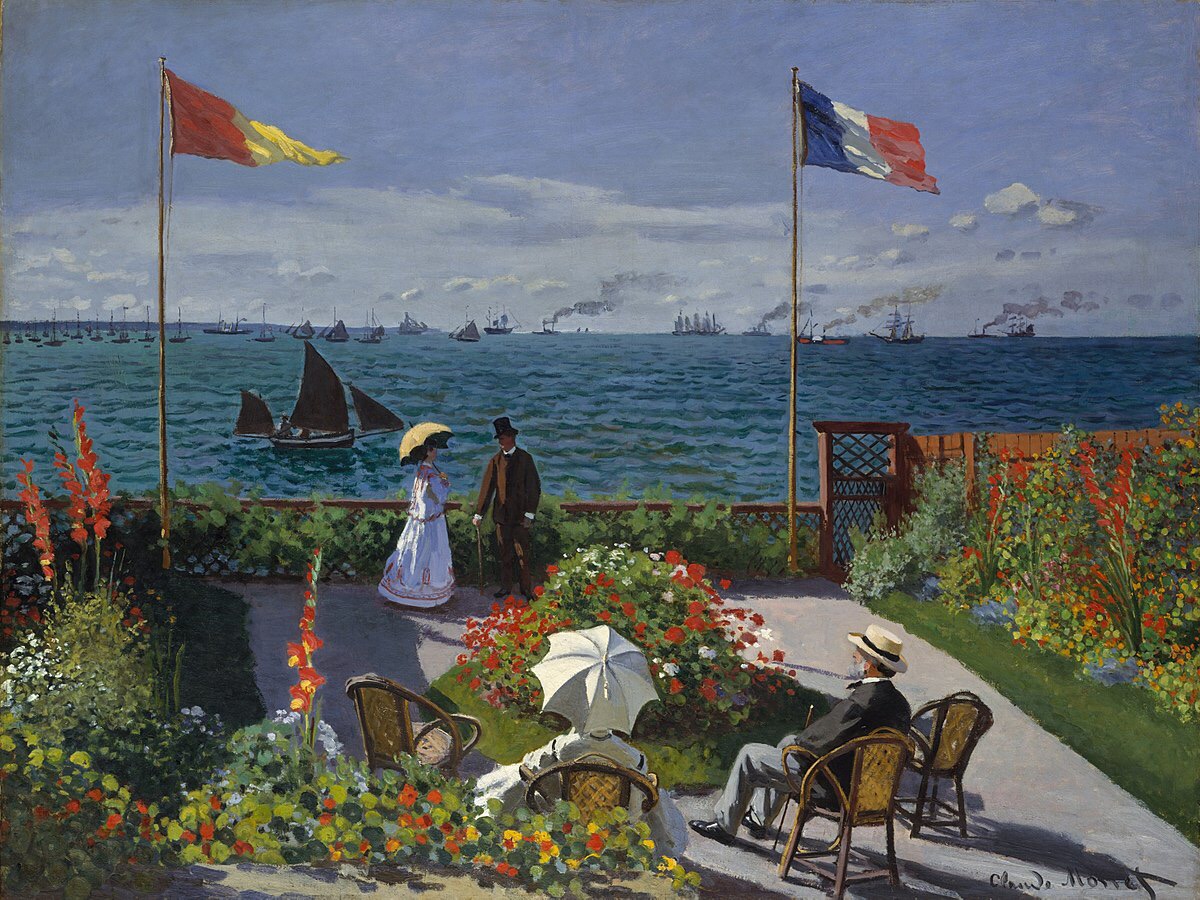 Over the course of his creative life, Boston-born Frederick Childe Hassam (he would later drop his first name) produced over 3,000 paintings, watercolours, and lithographs. Having begun his career as a draftsman for wood engraver George Johnson, he established his first studio in 1882. Working mainly in his preferred medium was watercolour, he depicted scenes on misty days or at dark nights and concentrated on movement (pedestrians, carriages, etc.). Hampered by la lack of formal training, Hassam undertook a study trip to Europe during the summer of 1883. He travelled extensively in order to take note of the Old Masters, creating many sketches and watercolours on the way. In 1885, back in Boston, he created _Columbus Avenue: Rainy Day_. The image of a buzzing city in damp weather conditions indicated Hassam’s ambition to introduce urban themes in the Impressionist manner to an American audience. He returned to Paris and settled near Place Pigalle. One of his Parisian streetscapes was exhibited at the Salon of 1887. Two years later Hassam moved into a studio apartment at New York’s Fifth Avenue and established the reputation of being ‘America’s Monet’. He was instrumental in promulgating Impressionism to collectors and dealers. 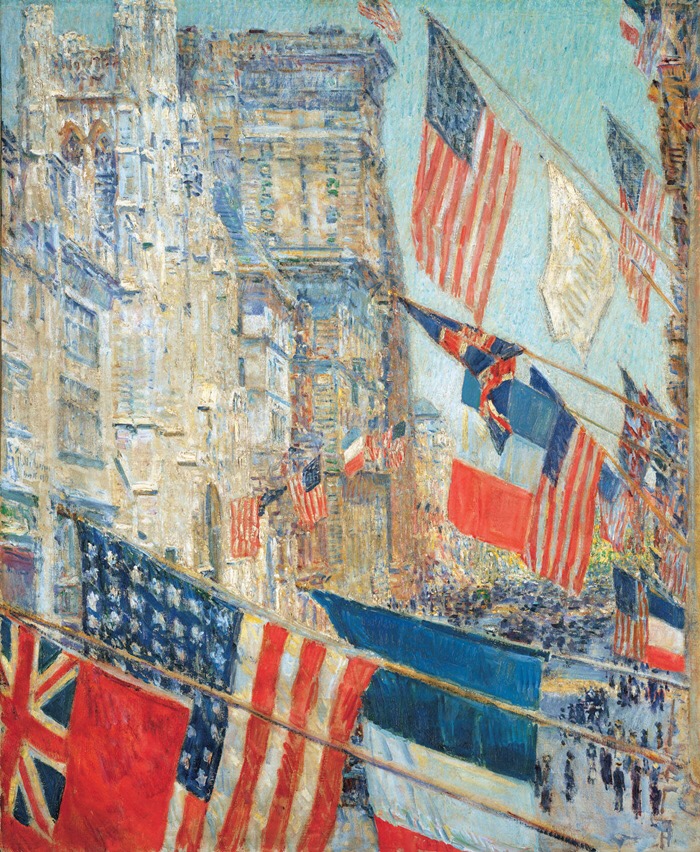 Between 1916 and 1919 flags flew from almost every pole in Paris, London, and New York. Hassam composed a set of about thirty paintings showing images of a flag-decorated Fifth Avenue. The first in the series of Stars & Stripes paintings had been inspired by a so-called ‘Preparedness Parade’. War in Europe sparked an American debate on involvement. Theodore Roosevelt advocated expanding the military in anticipation of the spreading conflict, but President Woodrow Wilson preferred a position of armed neutrality. Parades for and against engagement were held around the nation. Hassam supported the idea of intervention. Being an avid Francophile and passionately anti-German, his flag paintings were both deeply patriotic and aimed at encouraging the Allied war effort. 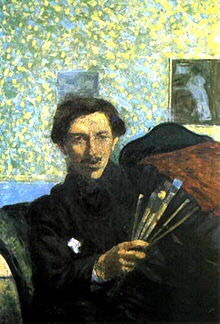 In the years leading up to the First World War flags and banners had become the symbols of an intensely felt nationalism. Flag desecration was its inevitable correlative. In 1914 futurist artists began a hate campaign against the Austro-Hungarian Empire which controlled a number of former Italian territories. In September, Umberto Boccioni, seated in the balcony of the Teatro dal Verme in Milan, tore up an Austrian flag and threw it into the audience, while Marinetti waved an Italian flag (although there are contradictory reports on the incident). The outbreak of war further encouraged flag worship. Patriotism became idolatry. In 1915 [Giacomo Balla]() painted _Bandiere all’altare della patria_ (Flags at the altar of the motherland). Flags symbolized various extreme political cults. Music and banners emerged as powerful tools in the nazification process. Consecration fanfares and flag songs were composed in honour of the Führer and performed during tightly organized rallies. Anthem of the Nazi Party was the Horst-Wessel-Lied, also known as ‘Die Fahne hoch’ (Flags on high – from its opening line). Flags achieved the status of a graven image. The Blutfahne was originally the banner of the fifth Sturmabteilung (Stormtroopers). After the crushing of the Munich Putsch in November 1923, it was soaked in blood. Restored upon Hitler’s release from prison in 1925, the blood flag was idolized asd a ‘sacred’ Nazi relic.

Erich Fromm, born in Frankfurt am Main into a Jewish family, moved to Geneva after the Nazi takeover and from there, in 1934, to Columbia University in New York. He had observed the mass psychology of flag-waving from nearby. In _The Sane Society (1955) he insisted that nationalism is ‘our form of incest, is our idolatry, is our insanity’ – patriotism is its cult. Just as love for one individual which excludes the passion for others is not love, love for one’s country which is not part of one’s attachment to humanity is not love, but idolatrous worship. Waving the banner of nationalism is politically and morally pervert. It causes xenophobia, emboldens bigotry, undermines democracy, and creates demagogues. Nationalism limits the individual as being the sharer of a distinct group based on such indicators as language, religion, or ethnicity. It builds – either for real or in a metaphorical sense – a protective wall around its members to keep out ‘others’, because newcomers threaten their way of life, take their jobs, rob their properties, rape their daughters, or block their GP appointments. The other in our midst means bother, a person not to be embraced but to be treated as suspect. The foreigner is a threat – he is to be registered, controlled, marked, and made visible. His status has to be settled. 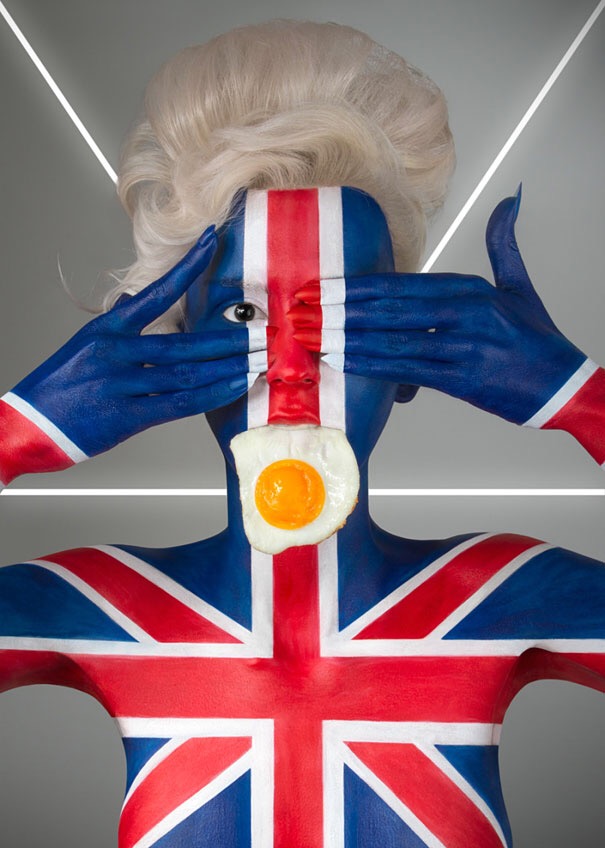